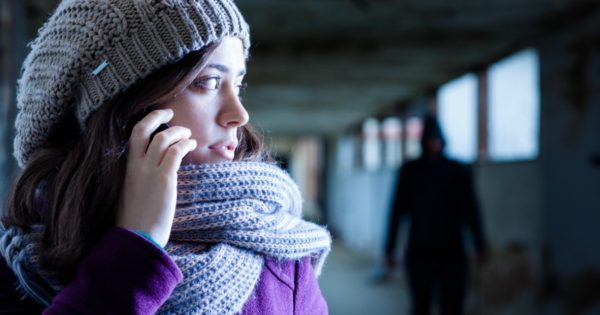 New research carried out by the University of York and The Children’s Society has found that one in three girls is afraid of being followed by a stranger. The report shows that fear of crime is the biggest issue for 10-17 year olds, with the majority of girls naming stranger danger, and boys fearing physical assault.

“Me and my friend were at the park and then there was this flasher and he came out of the woods and we just ran,”said an 11 year old girl. Another secondary school pupil said that men drive past and “wind down their window and like proper look out the window and go slow”. “I was walking back from school and the taxi man pulled up and said, do you want a free ride?” said another. More than one girl interviewed reported being made to feel uncomfortable by men in cars “beeping” at them, including when they were in their school uniforms. “I was with my dad walking and these men in a van beeped at me and my dad shouted ‘she’s 14’ and they drove off,” one teenage girl said.

Here are our top tips for keeping safe….

Just don’t. Its not worth it. If someone offers to walk you, always say yes. Don’t worry about putting them to trouble. Walk with friends, or get a parent to pick you up.

This is your first line of defence. Be aware of yourself, of your surroundings, and of potential dangers and safe spots. Leave your headphones out, so you can hear whats going on around you. If you’re walking alone, keep your head up and look around, not at your feet. If there are a group of people walking ahead, try to keep as close as you can to them, so you feel less alone.

Your “gut” is a secret sixth sense which gives you a subconscious insight into people and situations. Don’t ever ignore it, it a situation doesn’t “feel” safe, get out of there.

It would be great to take some self-defence classes if you can, but if not, even the basics will help. Take five minutes to watch a couple of videos like the one below. Hopefully you will never need them, but better safe than sorry.

If a potential attacker demands your bag/phone/purse, throw it as hard as you can in one direction, and run in the other. If its really the items they want, they will probably leave you alone. Don’t EVER hang on to your items, they are all replaceable, you are not.