Comhairle na nóg and me: By Skye

A thing recently happened that blew my mind. I won a Garda youth award for my work in my local Comhairle Na Nòg. Now THAT, guys, (mostly) gals and non-binary pals, is an organisation you should look about joining (if you want to!).

There’s a Comhairle in every county, and if you’re interested in politics, bringing about change in your local area or even having fun with your friends in a FREE (free was definitely one of the most appealing factors for me, I’m a massive nerd who blows a lot of her money on video games and books therefore I am perpetually broke) youth club where you make amazing friends and get to go to nice events. For example my Comhairle went rock climbing and abseiling and have a tradition of going down to Carne, a place in Wexford for three days every Summer. 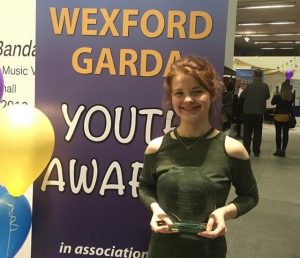 Every person I’ve met who’s part of their local Comhairle loves it. I could talk about it for hours, I made such incredible friends there who aren’t just ‘work friends’, you actually meet such a diverse range of people your age that you want to hang out with them outside of Comhairle, and I’ve done so, you meet people you actually want to be around with, and as an introvert this gets the genuine ‘You-will-enjoy-this-I-Swear- seal of approval.

It’s really nerve wracking at first, you’re thrown into the deep end with a bunch of people you don’t know, but after a few meetings you’re all drinking tea and playing board games or dancing on a pool table to music. I’ve been part of it for two years, and recently myself and my Comhairle both won awards! The award is currently staring me in the face while I type this, and while it is beautiful I am constantly terrified my clumsy self will break it, I knocked it over twice the night I got it because I was trying to reach for a chicken nugget and just barrel rolled my arm into it, apparently.

I gave a speech that night as I accepted it, one I was not aware I was to give but was told I had attached one when I was nominated ( I didn’t, the woman who nominated me, Paula the FDYS coordinator for Comhairle and actual angel and all of Wexford Comhairle’s second mother ) had put it in her email application for the award, and my God did I nearly faint on that stage but- I did it! Having said that, I have done public speaking before, it’s something I actually discovered I loved through Comhairle. As one of our events Wexford Comhairle would hold an event called Teentalks, which was where teens talked about any issues they were passionate about in a poem, speech or animation. Public speaking/performing is another thing I would recommend by the way, whether it’s through music, poetry, speeches, animations or dance, it really does help with your confidence. We all have a voice, and if you have an opinion, let it be heard! People are going to judge other people no matter what you do, so do what makes you happy and remember everything you’re doing is for you because you love it. Awards are great, but the best feeling is how rewarding it is to do something you love completely unapologetically and learn to recognise that loving yourself and doing what you want to do is one of the world’s greatest feelings.

Love yourself! Love what you do, love what you love, because if you don’t do it, who else will? – Skye 🙂