Yusra Mardini. The refugee girl making waves at the Olympics

When watching the Olympics we all love to find an underdog we can get behind, and everyone loves a good back story. Well, this one  is a doozy. 18 year old Yusra Mardini is one of 10 refugee Olympians  competing this year.

While competing in the Olympics might seem like the biggest challenge any individual will encounter, Yusra has been through more than most her age. She and her sister saved 20 lives when they pushed a sinking dinghy to land whilst seeking refuge from war-torn Damascus. She describes training in pools with no roof due to bombings and at times being unable to train at all. Eventually, herself and her sister travelled through Lebanon and Turkey before trying to cross the Aegean sea into Greece.

When the motor failed in their boat, the sisters and two others pushed the boat for 3 hours in open water.

“We were the only four who knew how to swim,” she said . “I had one hand with the rope attached to the boat as I moved my two legs and one arm. It was three and half hours in cold water. Your body is almost like … done. I don’t know if I can describe that.” 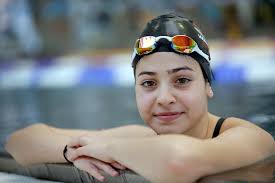 But while she now hates open water, the memory is not a nightmare for her. “I remember that without swimming I would never be alive maybe because of the story of this boat. It’s a positive memory for me. It’s tough,It was really hard, for everyone, and I don’t blame anyone if they cried. But sometimes you just have to move on.”

Mardini now lives in Berlin, where she trains for 2-3 hours before school every day, and again in the evening. “I want everyone to think refugees are normal people who had their homelands and lost them not because they wanted to run away and be refugees, but because they have dreams in their lives and they had to go,” she said at a press conference announcing her place on the team.

“Everything is about trying to get a new and better life and by entering the stadium we are encouraging everyone to pursue their dreams.”