Spiking Explained – Everything You Need To Know 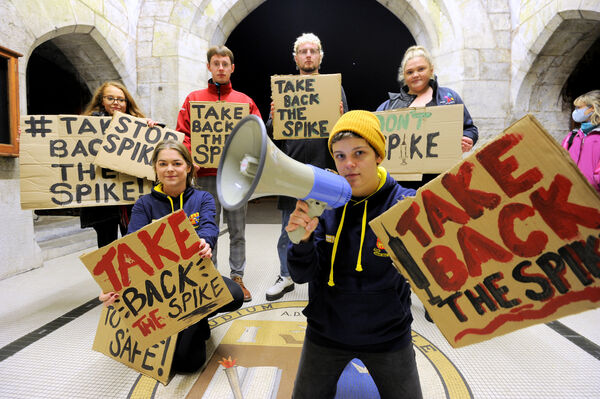 You may have heard lots of chat recently about “Spiking”, or may even know someone who has experienced it. UCC’s Bystander Intervention Group have been doing great work to raise awareness and advise us on how we can empower ourselves against it.

We are so grateful to them for providing information and writing this article, especially for the Shona Community….

In the last few months as COVID–19 became more manageable, people have been going out to experience nightlife and cultural events again. Unfortunately, a minority have seen this increase in people enjoying themselves as an opportunity to escalate activities like spiking, sexual harassment and assault. At the beginning of November, spiking hit the headlines as reports of cases in the UK and Ireland caused concern. In particular, reports of injection spiking were making an appearance for the first time in the islands and began trending on social media. This article will break down the different forms of spiking incidents, how you can spot spiking and what you can do about it.

First, let’s talk about what spiking is:

Traditionally spiking involved slipping drugs or alcohol into a drink, without the knowledge of the victim, which has the effect of altering your behaviour and can be motivated by an intention to take advantage of you. This can be to carry out theft or it can be to commit a sexual or physical crime. Other times it can be carried out purely for the amusement of the perpetrator.

It can occur in a range of different ways:

In recent months, reports of incidents of injection/syringe/needle/intravenous spiking have increased, in particular on social media. An Garda Síochána reported at the end of November 2021 that the total number of recorded spiking incidents across Ireland was 46, averaging 1 per week. The difference between traditional spiking and injection spiking is that whilst traditional spiking involves putting alcohol or drugs into someone’s drink without their knowledge, injection spiking involves using a needle syringe to put drugs into someone’s body. When a person is spiked, the substance used works as a depressant to slow down the body’s responses, placing the victim more at risk.

Most drugs used for spiking (often called ‘date rape drugs’) take effect within 30 minutes and symptoms can last anywhere between 12–72 hours. This short time period of the drugs remaining in the body means that it can be difficult to medically identify the spiking if it is not reported as soon as possible.

Minister for Justice Helen McEntee has stated that;

Spiking a person’s drink or spiking someone by injection are obviously very serious offences, they are, in effect, poisoning and they are criminal offences… that can result in a three-year prison term

Additionally, whilst spiking in itself is a form of assault, the act of spiking can be a means to commit further acts of assault or sexual assault.

Okay, but how do I recognise the signs of spiking:

Spiking can be a tricky thing to identify, especially when very often there may be no signs of any interference at all. It has been suggested that sometimes the ice in your drink may sink, there might be excessive bubbling, or the drink may appear foggy, but these are not reliable guides to indicate a drink has been spiked. Spiking in a drink can be odourless, tasteless– that’s what makes it so dangerous.

The effects of spiking can be much more obvious:

So I know how to identify a situation, what can I do about it?

The first step of being an Active Bystander is noticing a situation – if you see someone acting strangely after a drink, you should check in with them by interpreting the issue as a problem. The next step is feeling the responsibility to act. Choosing whether or not to intervene can have the power to irreversibly change someone’s life, and if you choose not to, you become part of the problem.

There are some ways you can go about this:

It may be difficult to intervene, so don’t be afraid to call for supports.

If you suspect you have been spiked, alert bar staff immediately, if you are with trusted friends, ask for them to bring you to a safe place and to contact the Emergency Services on 999/112.

[Bystander Intervention is University College Cork’s response to sexual harassment and violence. In November 2021, their team were the first in the country to come out vocally and visibly in opposition to the spiking crisis with the #TakeBackTheSpike Campaign. You can learn more about Bystander Intervention by visiting their website at www.bystanderintervention.ucc.ie or by following them on Instagram and Twitter at @BystanderUCC]

If you would like to support us and the work that we do,  you can donate below