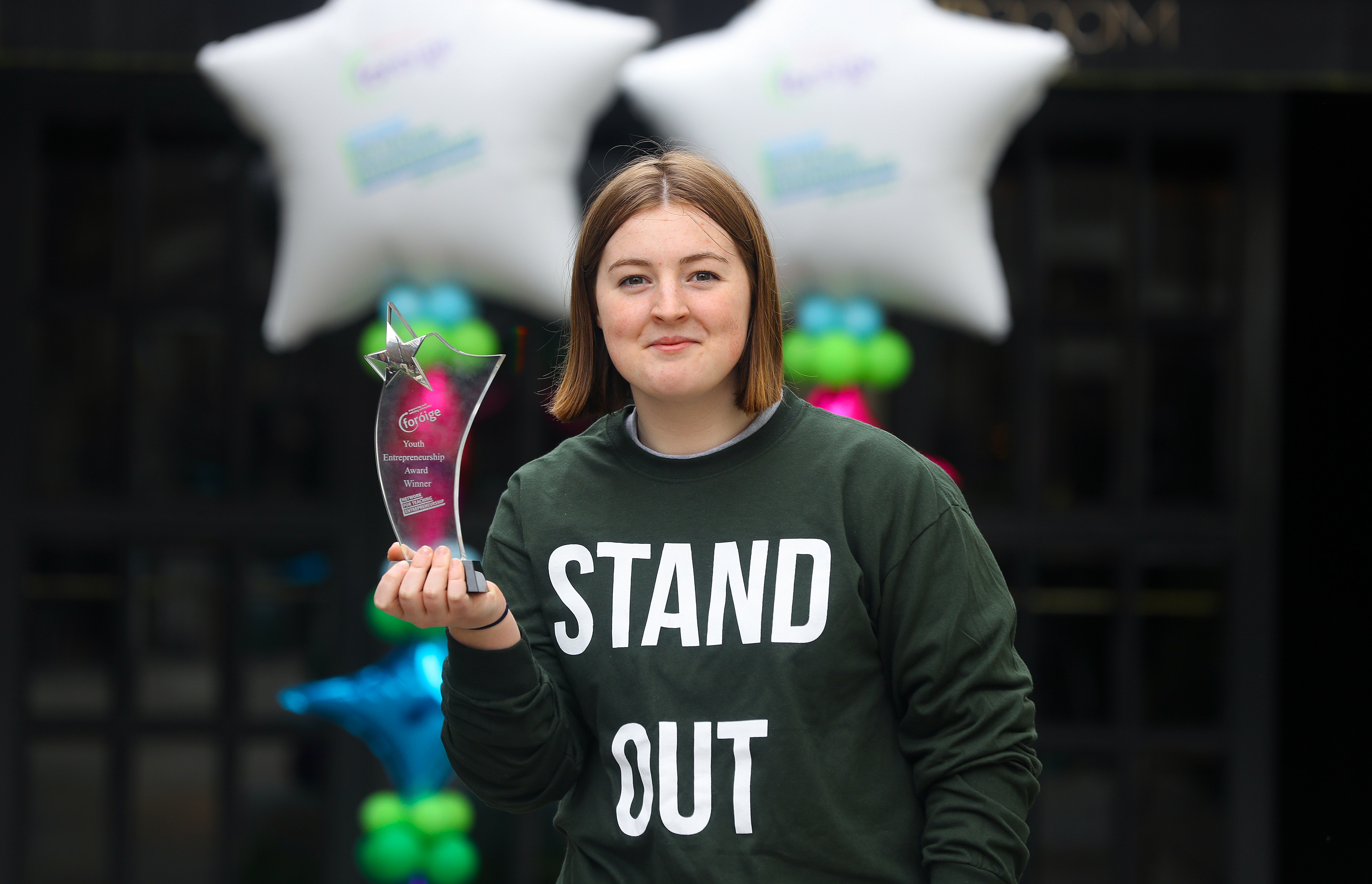 · a project or undertaking, especially a bold or complex one.

My experience with enterprise began in my first year of secondary school. When I arrived in Magh Éne College, we began ‘tasters’ of subjects that we had the option of undertaking as part of our Junior Certificate curriculum. I had no prior knowledge of Business in any sense, and without the ‘taster’, I probably wouldn’t have chosen Business Studies as a subject. I didn’t think it would serve any relevance to me and from what I had heard, it didn’t particularly peak my interest. Which all seems very strange to me now, with business being the only thing I want to do/study.

Nonetheless, not two months after my first ‘taster’ I had chosen Business Studies and at the ripe old age of 14, was bringing in shipments from China for my very first enterprise, a business centred around providing merchandise for my favourite boyband, One Direction. This was the first time I’d ever been referred to as ‘Innovative’ or ‘Entrepreneurial’ . 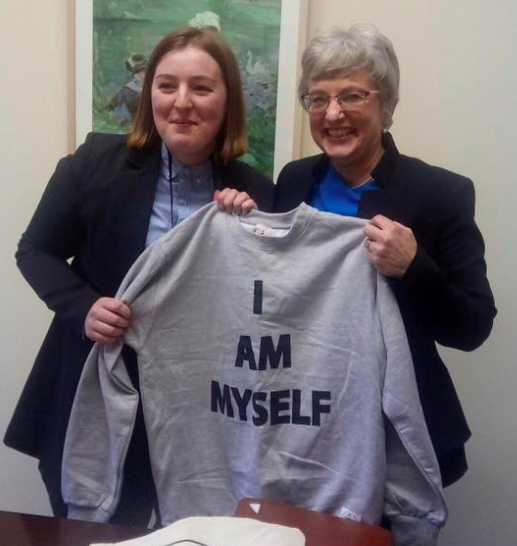 Fastforward, 3 years, I began Transition Year and immediately chose Enterprise as my main subject choice. I had a new idea, one that I had been working on for a little under a year before I began Transition Year. On the 10th December 2016, I launched my business. K.T. Clothing Co., the first gender neutral clothing line in Ireland and also one of the most affordable worldwide. K.T. Clothing Co. Focuses on removing the stereotypes associated with clothes, i.e. pink is for girls, blue is for boys.

To start chronologically with some of my proudest achievements this year:

I’ll begin in January a month after I launched K.T. Clothing Co. I wrote to my hero, Minister For Children & Youth Affairs, Dr. Katherine Zappone and requested work experience with her. Then she sent a letter, which I might add is sitting proudly framed on my bedroom wall, congratulating me on K.T. Clothing Co. and mentioning she was looking into work experience. Then, I received a second letter, inviting me on the 3 Day work placement in the Department of Children & Youth Affairs including a day in The Dáil to view Minister Zappones ‘Leader’s Questions’. To meet someone like her who is so positive and sincere about addressing the needs of young people in Ireland is amazing.

Secondly, I took part in the NFTE Programme, which is a programme that requires a student or students to take an idea and set it up as a functioning company. I won the Donegal regional final which meant that I would take part as one of the final seven in national final in the Mansion House Dublin. And the day after I completed my work placement with the Dept. Of Children & Youth Affairs, I competed in the national final. The process involves a showcase of the business and a business pitch to judges. Pitches usually last 20 minutes, however I was speaking for 45 minutes which I hadn’t even realised until I had finished. Later that day, I was awarded National Youth Entrepreneur of the Year and I will represent Ireland in the European Finals in Sofia, Bulgaria this November.

Last but not least, Myself and 29 other women were honoured at the ‘U Magazine 30 Under 30 Awards’. I won Start-Up of the Year. This was a huge shock to me. I mean, ask my brother, Christmas isn’t Christmas unless he’s made sit through a feminist documentary, so to be even nominated for something like that let alone winning was surreal. 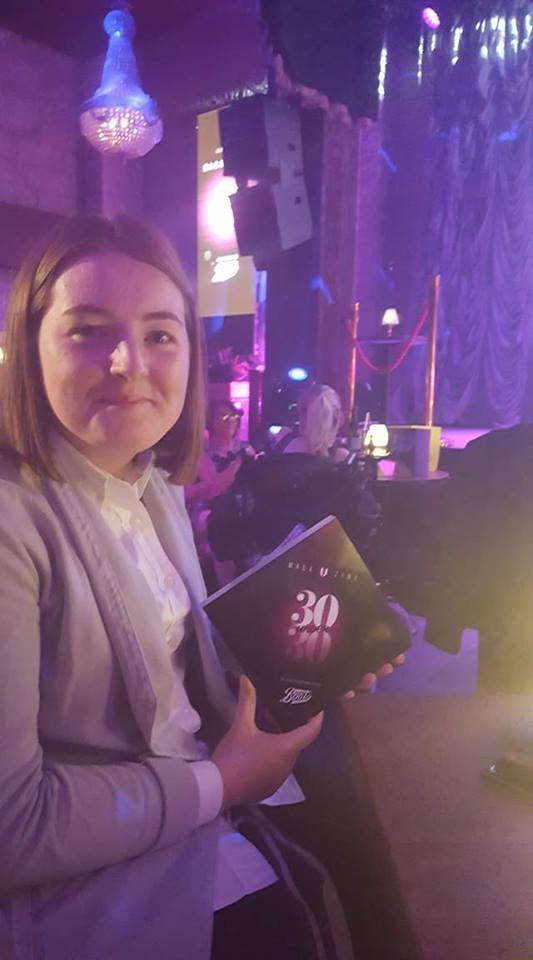 Also this year, I was ecstatic to be invited to Dublin Pride on behalf of Bank Of Ireland, to be nominated for the ‘Pride Power List’, reach the final five at the Irish Tatler Women’s Academy Day, to take home 1st Place in Innovation & Entrepreneurship at the Donegal ETB Awards, and to be included and quoted in the Irish Tatler, the Irish Times & the Irish Examiner to name a few.

I think entrepreneurs and the business world in general is painted as very cut throat and a dog eat dog world. But I think as an entrepreneur and founder of a company that could have a part in changing the stereotypes associated with clothes, it is important to positively represent social enterprise and to be socially responsible. To make a difference rather than make money. 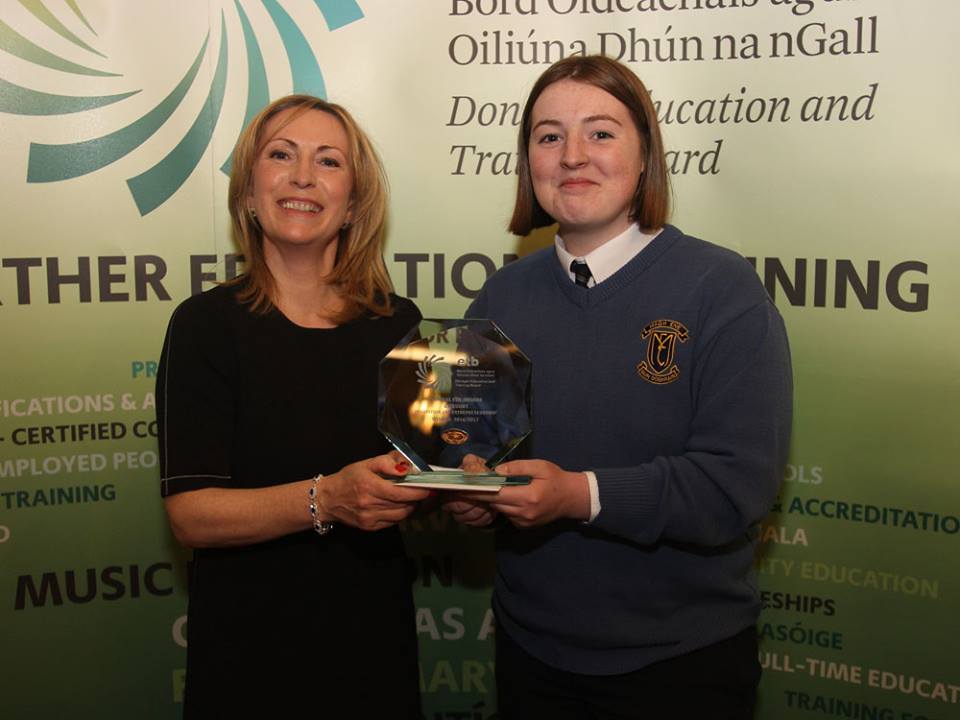 It’s important to recognise the people that got you to where you are. I am a sole trader, a one-person business, but I am humble to the fact that I wouldn’t’ve been able to reach this point on my own. It’s important to remember the teachers who supported you and provided advice, the friend that proofreads your presentations or modelled for the brand, the mother that tells you it’ll work out when you’re terrified it won’t. Just because you run day-to-day operations on your own, doesn’t mean you are alone.

So what’s next for me, I will be launching a my new range very soon. I am very focused on my campaign and excited for European Youth Entrepreneur of the Year. And I’m very excited to continue with K.T. Clothing Co. and to continually advocate to need for gender neutral clothes.

I am also always very happy to answer any questions or queries regarding Youth Entrepreneurship or Gender Neutral Clothing, contact: www.ktclothingco.com