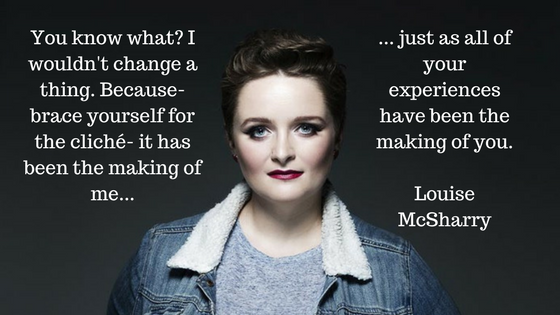 In case you don’t already know, DJ, author and all round legend Louise McSharry is the dream best friend you didn’t know you needed. If you follow her on Instagram, you already feel like you know her. You’ve seen her funny, confident and oh so glamourous but you’ve also seen her sweaty, sleep deprived and vulnerable.  Louise McSharry is REAL.

In her life, Louise has seen hardship, and had to drag her self up from numerous situations that would have broken a lesser person.  In her 2016 book, “Fat Chance” she tells her own story, highs and lows, in one of the most honest accounts you’ll read. Here’s what you need to know.

1: Louise’s birth father died of cancer when she was very young, after which her mother became an alcoholic. Louise had eternal hope that her mother would get better saying “I sometimes wonder if the good patches did us more harm than good. Its hard to give up on someone when they keep tempting you with how things can be. Hope can be a terrible thing.” After an ill fated move to the US to start a new life, Louise was eventually adopted by her Aunt and Uncle. Dee, Louise’s birth mother ended up homeless for a time, and became paralysed after a beating. She passed away last year. Louise says “If you’re not an addict, count your lucky stars that your life has not driven you to a darkness that is intolerable. Count your lucky stars that your circumstances haven’t resulted in you growing up in a house which taught you that drinking and using drugs is the way to live. Thank your lucky starts, because there but for the grace of God go you.” You can hear more about Dee’s life here..

Should you wish to know more about her, give a listen to this @RTEdoconone. I’m grateful to have it. https://t.co/9oeTxApwHT

2: Louise gets very real about her struggle to love her body, something probably 99% of us can relate to. This lack of confidence held Louise back for a long time. Now she says “My body is not for show. My body is not to put clothes on. My body is built for a purpose and, until it fails me on that front, I refuse to view it as my enemy.”. And she means it (most of the time, she’s only human). She feels very strongly that fat-shaming has a lot to answer for, and can actually put some people into a very dark place. Nobody has the right to do that to another person. Louise is a genius with make up, her columns on dailyedge.ie are actually useful to those of us who want to look awesome but don’t have 2 hours to achieve it. And can we just say, have a look at page 192 in her book to see her rock a two piece like a boss. As Habeeb Akande says “There is nothing more attractive than confidence, once she sees her own beauty, everyone else will.” Louise McSharry is sexy as hell. There, we said it. 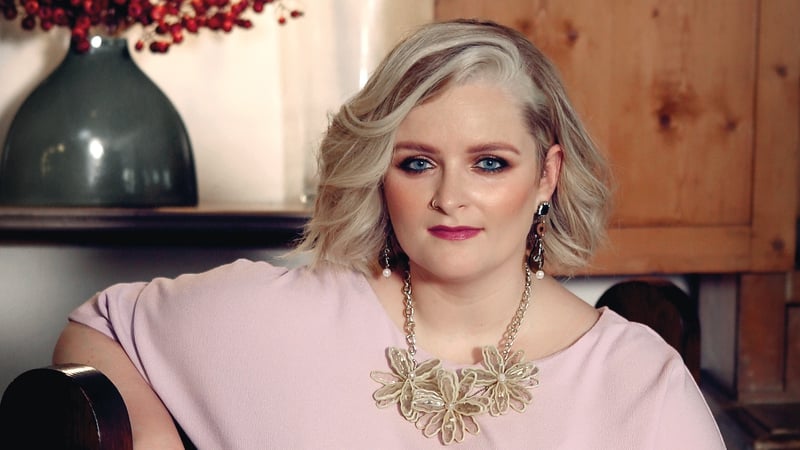 3: In 2014, Louise was diagnosed with Hodgkin’s Lymphoma, a type of cancer that often affects young people. She has shared this story in her book, with brutal and heartbreaking honesty and gives actual advice on how to get through it, and how to be a friend or positive support to someone who is suffering. You can hear her talk about her experience below, and note that her mantra for life seems to be “I am lucky.” Hard to say, harder to believe when you’re in a bad place. Louise made a documentary for RTE about her cancer journey, a vital resource and a total tearjerker. You can watch it here.

4: All Louise has ever wanted, and deserved, is a family of her own. We cried through the entire chapter  called “Kids” because at the time, Louise was unsure if her cancer had taken any chance of having children away from her. “As the door closed after me, the sobbing began, and I stood there in the car park of the Rotunda, on a beautiful sunny day, hating everything around me. I hated this bloody hospital. Hated every woman in it for being pregnant and having a bay. Hated bloody Chemotherapy, and hated my bloody body for failing me.” Well, once again her body hadn’t failed her, and last year she welcomed the worlds most beautiful little boy, Sam. You can meet and fall in love with him on her Instastories.

We love you Louise, lets have lunch…..

You can buy Louise’s book here.