Inspired by a post on social media, Eiman decided to write this article for us, highlight some of the unsung heroes, paving the way for the younger generation of hijabi women in sport.

For every well-known woman fighting to break barriers every day, there are about 10 quiet heroes, who don’t even know they’re making history.*

*This stat is not supported by any type of research and isn’t to be taken word for word! My point is that there are women/warriors who a lot of us may never have heard us. So allow me to expand your knowledge on some ceiling breakers you should all be keeping tabs on.

We all know Serena Williams and Katie Taylor, the ladies every young female athlete dreams of being. However, there is another wall placed in front of hijabi athletes. Being female, women of colour (most of the time), as well as having society’s pressure that women covered cannot simply play sport.

Maybe because of my immediate connection with hijabi athletes, being a hijabi myself, it brings a smile across my face to see Muslim women in sport and essentially proving everyone wrong. So without further ado, here is a selection of some of my favourite hijabi athletes!

Jawahir is the first Muslim, black, female, hijabi referee in the UK. She moved to England from Somalia when she was 10. However, she has always been in love with soccer. Women referees are already very scarce, so I’m sure a lot of the players and spectators might give a double-take when Jawahir starts blowing her whistle. But just like she convinced her hesitant parents that she has a career for herself in refereeing, she proves to everyone that she can do it, and will. 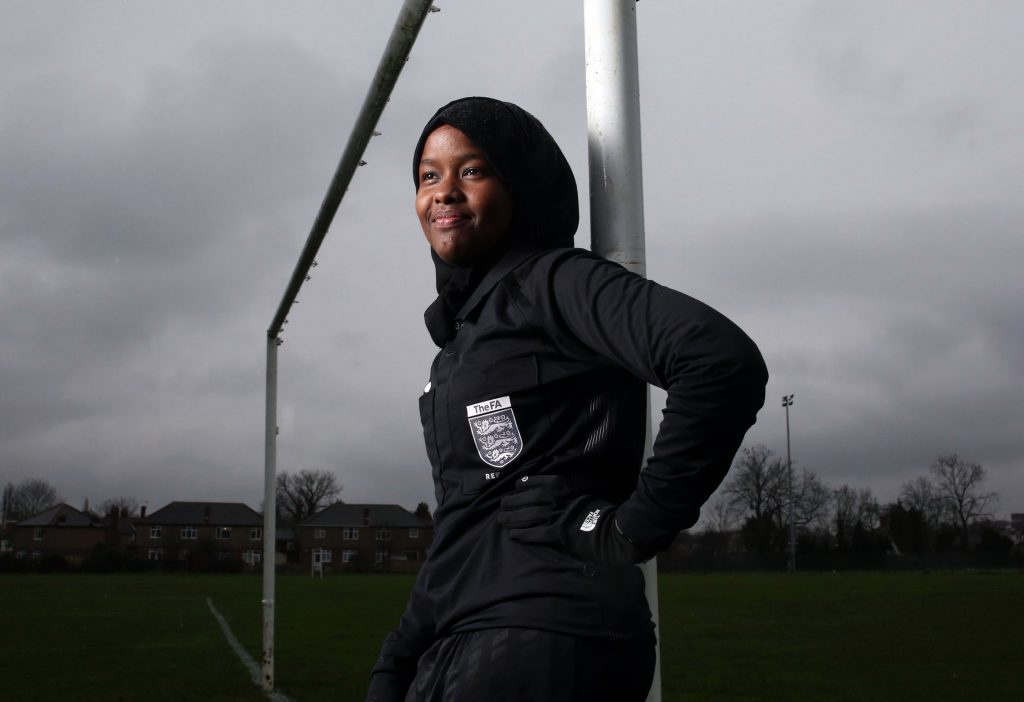 Asma Elbadawi is a spoken word poet and basketball player, born in Sudan and grew up in the UK. In 2014, she campaigned against the FIBA (International Basketball Federation) to lift the ban that prevented any headgear over 5cm long to be worn on the court. This global ban essentially prevented hijabi women from competing in the sport. Elbadawi’s campaign (FIBA Allow Hijab) got that ban lifted and changed the rules.

She told the BBC that: ‘The only way you can make change is by being the first.’

“Sometimes I just let my actions speak louder than words.”

Safiyyah Syeed is only 20 years old, from Bradford, UK but is already prepping to be the first-ever female Muslim boxer to compete at the 2021 Olympic Games. She sees boxing as an escape from the world. Syeed wrote a bucket list a few years ago, which included boxing, while she was fighting anorexia and bulimia. She’s picked up the sport and has found a new outlet for herself.

The main message from all these athletes is that they don’t want to be the first and last. It is really hard to step out into the world every day, knowing that you cannot control the fact that you always stand out. The struggle is real. These women, and the millions across the world that are like them to, do it despite the hardship, because doing what they love outweighs that all.

The best way to sustain their message is by having more diversity in sport, businesses, music, everything. I don’t believe they will be the last in their respective fields, do you?

Today's Post: A Letter To My Younger Self - By Aoi

Honestly, we're all just out here faking it until

“We are led by our gut instincts, our intuition,

Today's Post: How to Upgrade Your Convo Game "Whe

Oh sorry were you speaking? I couldn't hear you ov

Any type of progress is still progress. Don't forg

Excuse us Queen, you dropped this 👑

Today's Post: We’ve Cracked the Code! How To Be

We know exams are getting close, but we promise th

Name a better bestie duo than Leslie and Ann, we d

Our Shona HQ mantra! Never let fear hold you back

If you haven't already, join the thousands of girl

There's so much going on in this crazy world right

For the third year, The Shona Project is offering

When you are struggling, only give your energy to

Get that butt of yours off the couch and feel the