Why I Shared my Story: By Ash 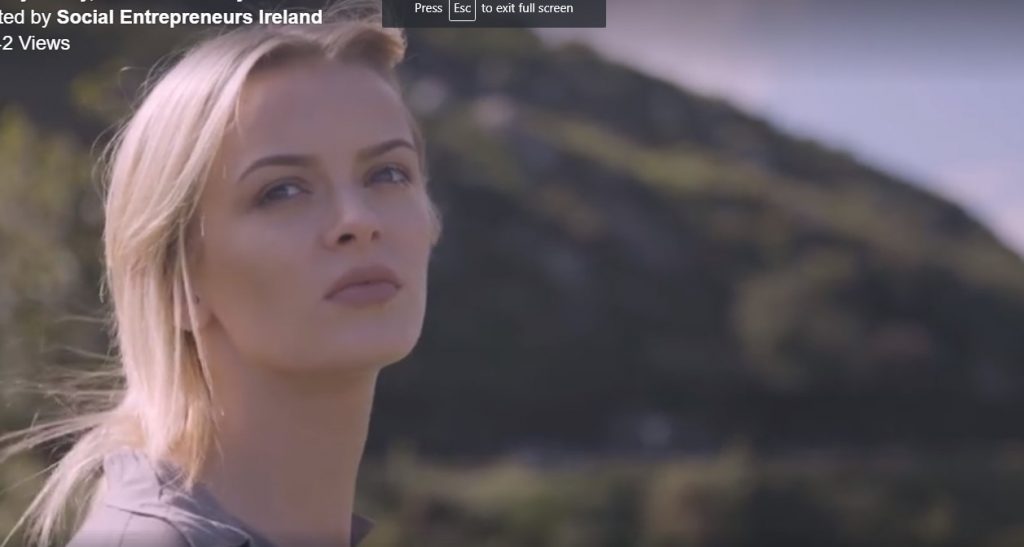 Last week, at the Social Entrepreneurs Ireland awards, the lights went dim, and Aisling’s video was shared across three massive screens with 600 strangers. Her honesty and bravery blew the entire audience away on the night, and since then, over 6 thousand (and still rising) people have watched it on the SEI Facebook page. The video shows only one of the many sides of Ash, who is smart, talented, beautiful and resilient. We are so proud of her. Here, she tells us why she decided to share and how she feels now….

When I saw two guys with a massive camera, light and microphone my heart slightly skipped a little bit. I definitely wished I had blended my make up better. I hadn’t really prepared anything to say or had any one-liners ready. I just had my guitar and myself.

I arrived at Tammy’s house on the day of filming and met the film guys, Tommy and Shane. Anxiety was through the roof but so was my excitement. We had done it, we were one of the winners of The Social Entrepreneurs Ireland award. Exciting things were happening and we couldn’t tell anybody yet. We filmed the video a month before the SEI awards. It was glamorous but still no hair or make up. Would’ve been lovely if they did.

There were two videos; one about Tammy and one about me. Each were only going to be a couple of minutes each but took hours of filming. Several things I literally pooed myself over was 1. Hearing myself being recorded, 2. Singing in front of these random guys who I literally just met and 3. Recording my story with a video, with my own voice and being shown to hundreds of people. I don’t know have you ever heard yourself on a recording but it’s not enjoyable in any shape or form it’s cringy and you go scarlet. As for telling my story, yes, I have done it before. I have written it down, thousands saw it on my own blog and thousands more on Shona, but saying it, really saying it with words, out loud, is hard. It will always be hard for me. I find it easy enough to type it because I can shed a tear or hide. Like right now, I’m writing this in my dirty fat man pants drinking tea. Recorded with a microphone clipped to my shirt? Terrifying.

Shane and Tommy were so nice to me and made me feel at easy so singing in front of them and “acting natural” turned out not to be too bad. But still telling my own story again to be recorded was very hard. We arrived at my house after having some lunch, and prepped my kitchen for recording. I had given my mother the heads up so the house was spotless and she was dressed up in her finest clothing. She gave an Oscar winning performance, pretending to be shocked as I came in the door with all the equipment. It was mad. We talked for maybe 45 minutes and Shane asked me questions about myself, my life, my story and Tammy. I answered all truthfully but it was all a blur.

The final footage is amazing, I’m sure some of you will have seen it. I got to see it the night of the awards and what a night it was. It’s only a minute and half and you can’t actually hear me singing, thank god! I met Sophie and Nic in Dublin as we were dressed in our Sunday best clothing, hair and make up yanno yourself. It was all so fancy and we were all awestruck. There was wine, fancy people and canapes. For those of you who don’t know what canapes are; they’re tiny little bites of food and you will almost be guaranteed to hit up the nearest chipper after. Also we met the COOLEST PEOPLE IN THE WORLD. Senator Lynn Ruane and REPEAL founder Ana Cosgrave. Awestruck wasn’t the word.

But long story short, we made it. Tammy, our friend and adopted mam had made it all happen. An idea turned into something that is gonna be larger than you can imagine. We were all so proud. It is safe to say I cried. My video came on and I bawled. Make up ruined from snot and tears but I have never been happier. I was proud of Tammy and I was proud of myself. We have gotten so far and are going farther. I was proud though of how far I have come. In under a year of working with Shona, I have gone from not telling anyone including my family about my mental illness to telling the world and being able to speak about it and help others. So there was tears, but they were of joy. This is only the start guys, watch this space!

If you haven’t yet seen the video, you can watch it below. Huge Thanks to Social Entrepreneurs Ireland, DCC and Areaman Productions, and especially to Aisling x