Turning Red – A Review By Aoife 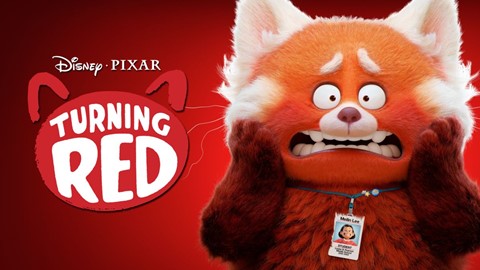 “Turning Red” is a heart-warming coming-of-age movie from Pixar Animation. It follows the story of Mei, a 13-year-old Chinese-Canadian girl who (inconveniently!) transforms into a giant red panda whenever she experiences strong emotions. Throughout the course of the film, we see Mei navigate the difficulties of growing up and balancing her parent’s wishes for her with the path she has set out for herself. I entered this movie expecting a cute, light-hearted film that would make me laugh. “Turning Red” ticked all of these boxes and more, and stands out in my mind as one of Pixar’s best efforts in recent years.

One huge positive of this movie is its straightforwardness in approaching difficult topics. The themes discussed are broad, ranging from mother-daughter relationships to puberty to friendship, and each one is handled with care. In fact, the film’s straightforwardness in discussing difficult themes drew some controversy when it was released- in particular, one scene contains discussions of periods. When Mei turns into a red panda for the first time, she hides in the bathroom, and her mother assumes that she has begun her first period. She explains that there is nothing to be embarrassed about, and offers her support and guidance. For me, this was a huge thing to see in a Pixar movie and just goes to show the strides we as a society have taken in the past few years to open the discussion around periods- a totally normal bodily function that roughly half of the population goes through. I am only 20, and yet it would have been unthinkable for a movie to discuss periods so honestly and positively when I was 13. I am happy for the teens who will now get to grow up with these discussions normalised as a part of daily life.

“Turning Red” is successful in terms of representation. It’s Pixar’s first feature film solely directed by a woman, Domee Shi. Shi also directed the 2018 short “Bao”, which won an Oscar for best animated short. It is also the first Pixar movie set in Canada (Toronto, to be specific, where Shi grew up). The film’s focus on the complex relationship Mei has with Chinese culture as a Chinese-Canadian is interesting. Of course, as a white woman, it is not my place to comment on the intricacies of Asian representation in the movie. But I will say this- “Turning Red” is universal, and this is what adds to its appeal. While it explores familial relationships in the context of Chinese-Canadian culture, the feeling of having to balance your identity in the eyes of your parents with the one you have cultivated for your own outside of your family is not exclusive to any one community. This is a topic that “Turning Red” handles really well in my opinion.

A huge driving force for Mei in this movie is the strength of her friendships. Miriam, Priya, Abby, and Mei bond over a shared passion for boyband 4*Town, and it is refreshing to see a depiction in the media of a group of girls who are genuinely, uncomplicatedly best friends. Too often I feel we are made to think that girls, especially teenage girls, are snide or bitchy toward each other. Of course, this can be the case, but I think that “Turning Red” shows a good example of what female friendships should look like. Each girl is celebrated for her differences, and supported by the other girls in the group. It is the girls’ love that helps Mei come to terms with her transformation into a red panda. When we take the red panda plot as a metaphor for going through puberty, this is a heart-warming look at true friendship.

Overall, “Turning Red” is an enjoyable, surprisingly emotional coming-of-age movie, with something in it for everyone. I would highly recommend it, especially to young girls.

As Aoife convinced you to add Turning Red to your weekend plans? Check out the trailer below!