On coming out: By Caitlin

Caitlin came out to her closest friends 4 years ago. Now fully out and very happy, she has written this piece in the hopes that sharing her experience might help  someone else going through the same thing….

Learning to be Proud: A Reflection on the Awkwardness of Self-Discovery

I accepted at some stage in my second year of university, after a particularly pleasureless evening with a boy who had no apparent flaws, that I should probably stop ignoring my burgeoning desires to buy flannel shirts and (probably more significantly) get with girls. But even if I couldn’t be ‘normal’, I wanted my life to essentially carry on as if I was. Having confided in a few close friends, I hoped (despite specifically asking them not to tell anyone) that somehow word would spread amongst my social group with minimal effort on my part, ripple-like, and that no one would raise it with me leading to awkward conversations. I hoped that this would swiftly lead to the acquisition of a very kind and normal girlfriend who would guide me through this difficult time, become a beloved member of the gang, and provide the perfect way to come out to everyone who hadn’t already heard about and accepted my newfound sexuality, as if nothing had ever been wrong.

Needless to say, this did not come to pass. Many months were spent awkwardly changing the subject when friends and family raised the issue of my barren love life (“no, just enjoying the single life at the moment so busy who needs relationships what an effort HAHA, so, another round?”). My kind and normal girlfriend had not yet manifested due to my continued inability to master how to identify non-straight girls in clubs and my terror of inadvertently trying to seduce someone who wasn’t interested. I felt like a 13 year old boy, except I was 20 now and most people thought I relatively had my shit together so it was somehow all even more embarrassing. 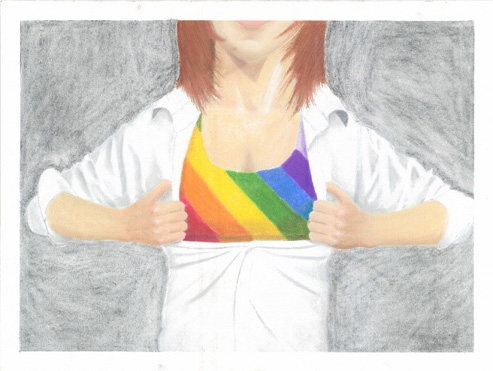 I remember desperately wanting something to relate to, something to help me feel normal and reassure me that things would work out ok. Popular culture has a notorious lack of lesbians who do much other than die or become straight, and since I had recently stopped hoping for either of those things to happen I was a bit lost. A lot of popular gay culture focuses around the Pride movement, but it scared me a bit and I felt unable to see myself in it. How could I manifest my feelings about something that I really just felt quite awkward and ashamed of in the form of a flamboyant parade? I don’t mean that I had anything against those who took part, a part of me longed to one day be amongst them, but I just didn’t feel like singing and shouting and waving banners about my sexuality at that point. I wished for some kind of midpoint, but all of my closest friends were straight and while they were incredibly supportive, there was always that absence of experience-based understanding that made it hard to articulate my feelings.

In hindsight, I’m glad things didn’t turn out as I’d hoped. I’m glad the first girl anything happened with was not a relationship of any kind, but a ridiculous summer haze of bonding over a shared love for two-or-more-day benders, and me probably being way too keen but she was largely quite nice about it, because it was fun more than anything and it taught me that liking someone could be something other than sad and weird and embarrassing. My imaginary kind and normal girlfriend would have been nice but I would have probably just fallen hideously in love with her and become incapable of finishing my degree (years of suppression had heightened the intensity of my emotions at the time). My main aim behind wanting to slip seamlessly into my new ‘out’ life was simply never having to talk about it, and that was actually a really, really terrible idea. Had I succeeded in my plans, all the previous confusion and struggle and unhappiness would still have been there, just bottled and unacknowledged.

And in what is probably a weird, self-destructive way, I am glad that things didn’t all fall neatly into place because it taught me how to be proud. Pride isn’t about having a big party to celebrate how great we all are and spreading the gay agenda (well, not only that), but about recognising that you know what, we have had to struggle a bit more to be happy about ourselves, and after hiding and feeling ashamed for much of history, and individually for much of our lives, damn right we’ve earned the right to be flamboyant. I know how incredibly lucky I am to live in a time and a place where no one tried to imprison me or try me for witchcraft or even call me a dyke, but that doesn’t make it easy.

I spent too long feeling like I didn’t fit in anywhere – not straight enough to be normal, not gay enough to be proud of it. Looking back at that uncomfortable liminal period of my life feels strange, and I generally avoid doing so. But from time to time I remember a particularly pained attempt to move my mother off the topic of whether I was seeing anyone, or some night spent crying in my flatmate’s room (one of the only people I had confided in at the time) about how I wished I was different, and I feel so proud of how far I’ve come. I haven’t got it all figured out; I sometimes find myself subconsciously avoiding looking ‘like a lesbian’, and from time to time I kiss men when I’m really drunk, and I admit that I still tend not to tell new people I’m gay if it doesn’t come up in conversation in an unavoidable way. But I am so happy with my identity and the way my experiences and relationships, good and bad, have shaped that. I used to feel alienated by the empowering slogans expressing pride that I just couldn’t seem to share, but now the most ubiquitous one resounds with me the most – fuck me, it gets so, so, so much better.

If you need some further advice on any of these issues, please get in touch with BelongTo, who are a great organisation offering support to the LGBT community.