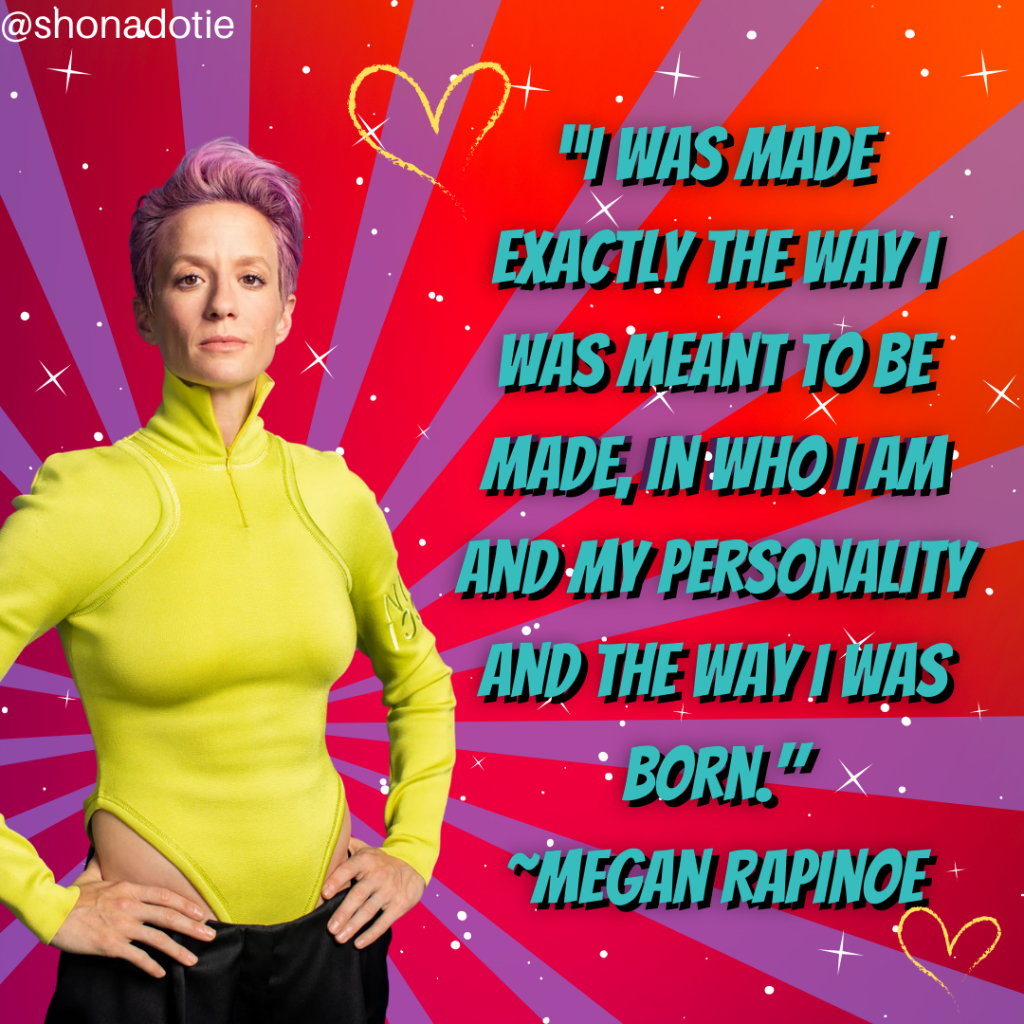 This name may ring a bell as Megan Rapino is a professional soccer player who captains the United States, national team. She holds the title of The Best FIFA Women’s play from 2019 and helped her team win gold at the 2020 London Summer Olympics, 2015 Fifa Women’s World Cup, and 2019 FIFA Women’s World Cup. She also has won the Ballon d’Or Feminin which awards women in football.

Megan grew up in Redding, California, and has both Irish and Italian ancestry. She started playing soccer at the age of three after being inspired by her older brother. She worked hard in school and appeared on the honour roll every semester of high school. She received the award of ‘All-American’ from Parade and National Soccer Coaches Association of America as a junior and Senior. She played under 14 for the Northern California state as a part of the Olympic Development programme in 1999. She went on to play for Elk Grove Pride in the Women’s Premier Soccer League from 2002 until 2005. This involved commuting two and a half hours from her hometown in order to play with the team.

Despite her achievements on the pitch, it is not the only thing Rapinoe is known for. She has become a bit of an activist for women in sports and numerous LGBT organisations. She is an advocate for the Athlete Ally and the Gay, Lesbian & Straight Education Network. Athlete Ally is a non-profit organization that focuses on ending homophobia and transphobia and sports. Something that Rapinoe herself has experienced.  In 2013, she was given the board of directors Award by the Los Angeles Gay and Lesbian Centre. She publically came out as a lesbian in July 2012 in an edition of Out magazine. She was part of the first same-sex couple to ever be featured on the copy of ESPN’s The Body issue when she appeared with her partner Sue Bird in 2018. In 2017, she and her teammate Alex Morgan were part of a group of soccer players who signed up for the ‘Common Goal’ campaign which has players donate one percent of their individual wages to soccer-related charities. Rapino and Morgan were the first two female players to sign up for the campaign.  Paving the way for females in sport, the US Women’s team was the first women’s sports team to be honoured with a ticker-tape parade in New York after their 2015 FIFA World Cup win. Each player received a key to the city from the Mayor. They were also honoured by President Barack Obama at the Whitehouse in October of the same year. 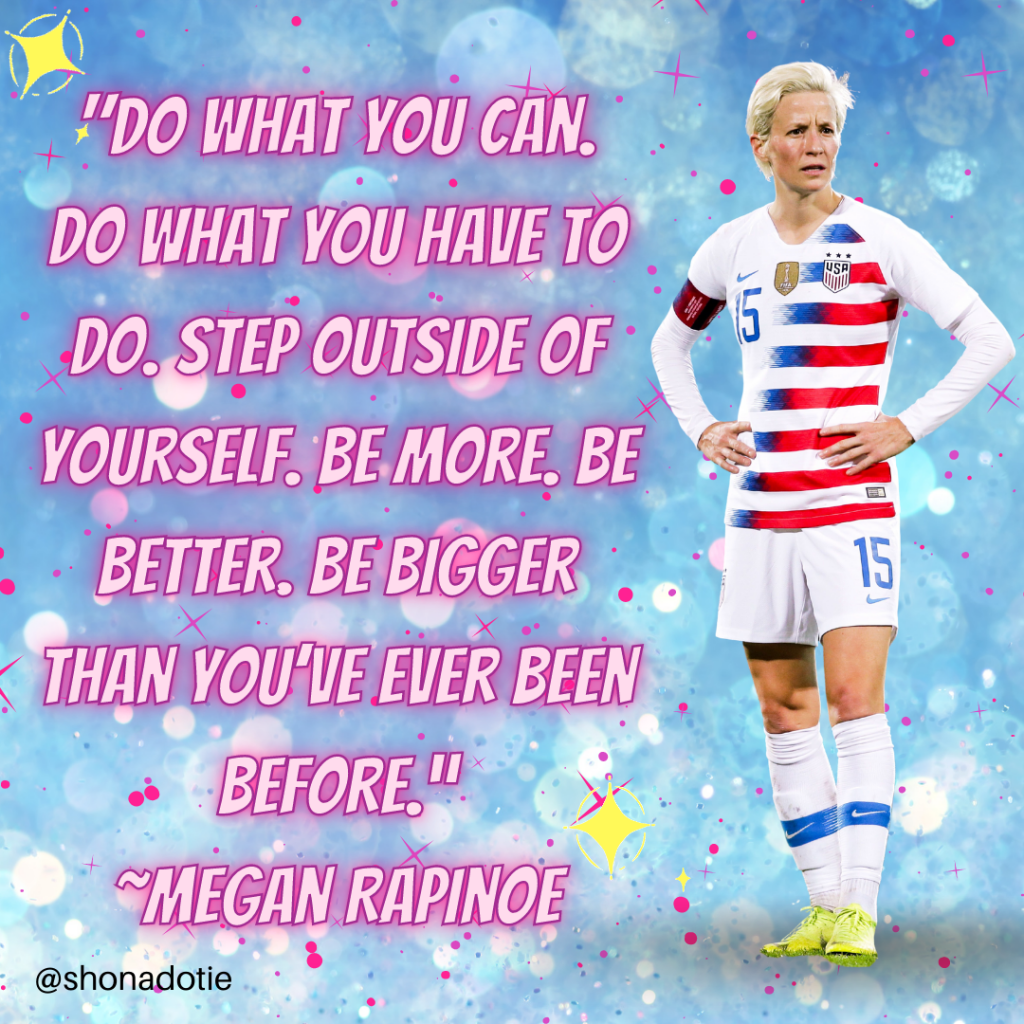 Rapinoe gained national attention in 2016 when she kneeled during the national anthem to show solidarity with Colin Kaepernick. Following the match she stated “It was a little nod to Kaepernick and everything that he’s standing for right now. I think it’s actually pretty disgusting the way he was treated and the way that a lot of the media has covered it and made it about something that it absolutely isn’t. […] Being a gay American, I know what it means to look at the flag and not have it protect all of your liberties. It was something small that I could do and something that I plan to keep doing in the future and hopefully spark some meaningful conversation around it.” During the national anthem at the 2015 World Cup, she stood in silence. She has been involved with the women’s team’s equal pay complaint since 2016, which fights for equal employment opportunities for female athletes. In 2019 she, along with her teammates on the US soccer team, filed a lawsuit against the United States Soccer Federation accusing them of gender discrimination based on pay disparities between women and male players. 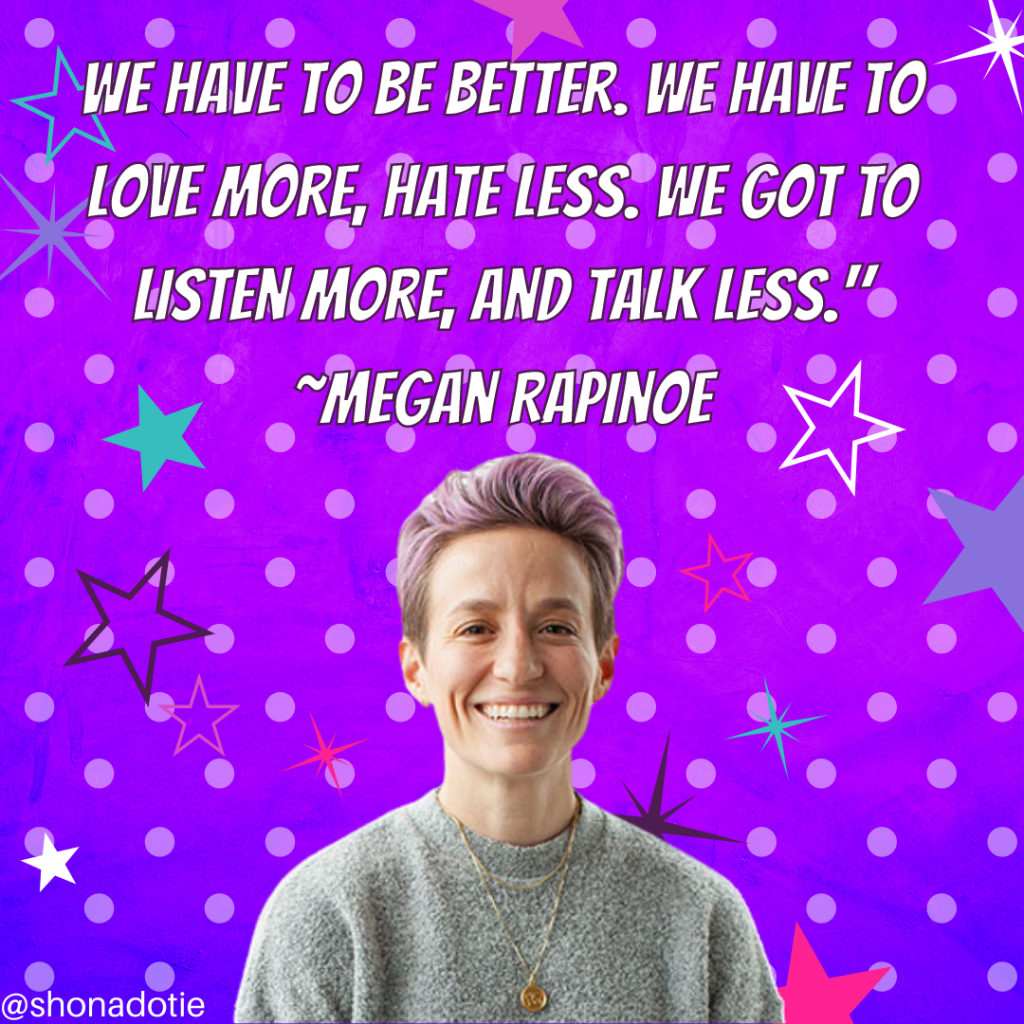 Her success on the pitch has gained her a number of sponsorships including Nike, Body Armour, Hulu and Samsung. In 2019, she went on to co-found her own lifestyle brand which was gender-neutral. Believe it or not, her hometown has honoured her by naming September 10th as Megan Rapinor Day.

To be honest, we are not surprised that she was listed on Time Magazine’s 100 most Influential People of 2020. This woman does not seem to stop! Imagine having a day named after you, what an achievement! We cannot wait to see what this lady, and the US Women’s soccer team, achieve next!