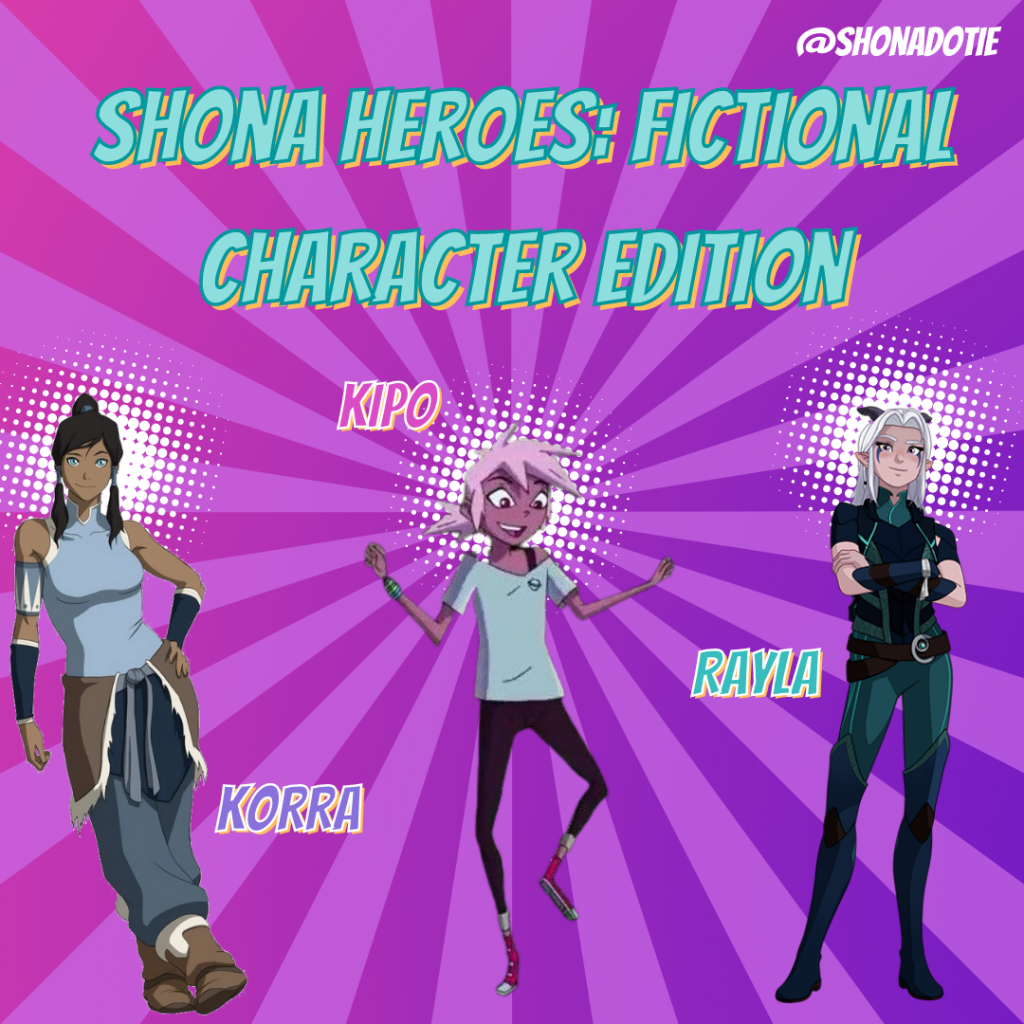 Every week, we tell you about some of the amazing ladies we have the honour of sharing this planet with. This week, we thought, what about all of the ladies that we look up to, that aren’t real?! For this week’s Shona Heroes, we’re highlighting some impressive leading ladies from animated shows.

**Spoilers will be marked with asterisks!**

Let’s start with Kipo, the nerdy main character in Netflix’s original show Kipo and the Age of Wonderbeasts. The show takes place sometime in the 23rd century where things are way different. Plants and animals have mutated, some gaining the ability to speak and form mini societies like the Newton Wolves, the Timber Cats, and the Dubstep Bees (cool, right?), and humans have been driven underground to live in burrows.

When Kipo accidentally ends up on the surface, she has to brave a world full of mutes (the mutated animals) hostile to humans to find her way back home. Luckily, she finds some friends (though none of them knows it at first) to help her.

And that’s exactly what we want to talk about here: Kipo’s kindness. It’s kinda incredible. Kipo makes friends with almost every single character in the entire show (**including the main villain for the first season**). That’s right, Kipo took one look at an 8-legged, 10-eared mega bunny, a human girl wearing a wolf skin and carrying a poison-filled staff, an army of plaid wearing, axe-wielding cats larger than herself, and decided each of them was friend-shaped. 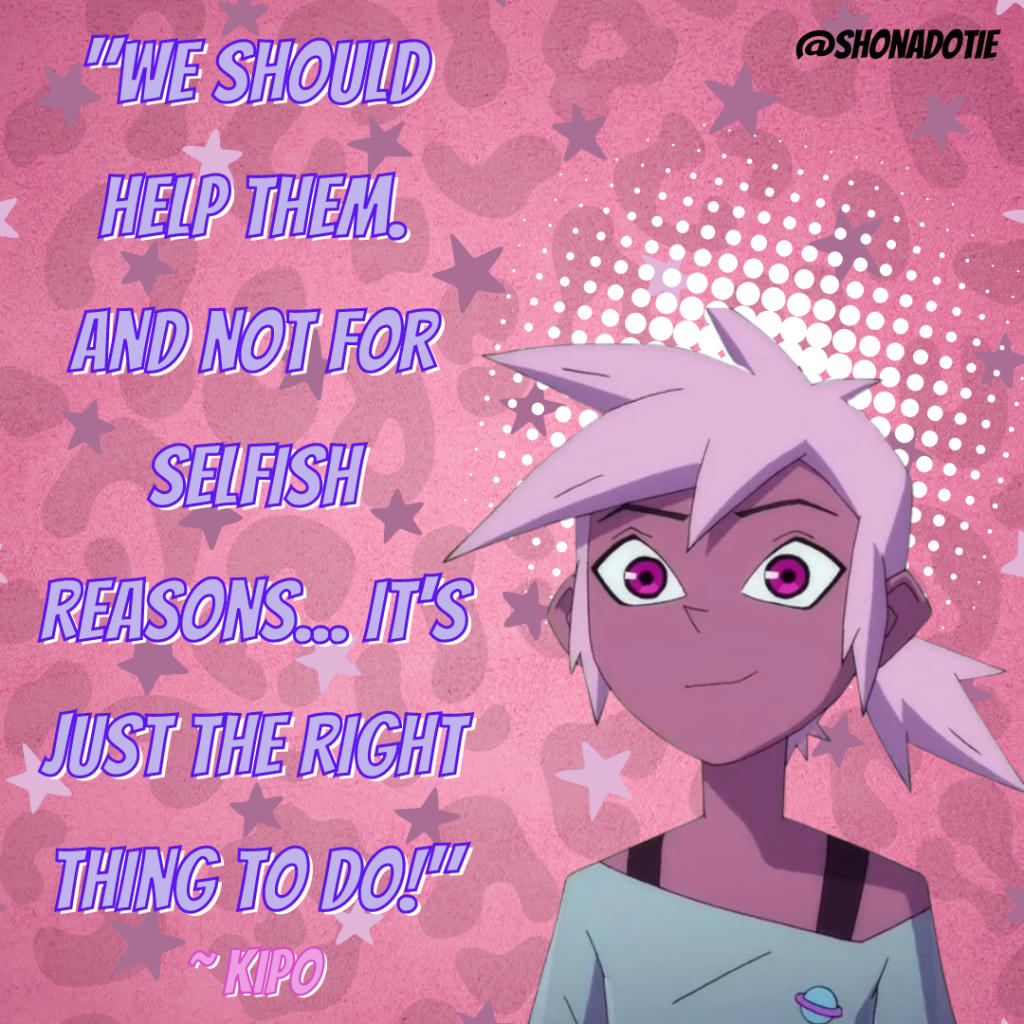 Even more impressive, it wasn’t easy for her. Every animal or person she tried to befriend distrusted her and a lot of them tried to capture her for the main villain. But Kipo didn’t let that get in her way. She stayed friendly, helpful, and trusting throughout the show, and it worked! She changed the course of the world for the better, steering it towards growth, peace, and community between humans and mutes.

We don’t know about the rest of you, but being able to watch a show featuring a kind-to-the-core girl (whose kindness actually results in more kindness) was a really comforting experience for us (the last episode made us cry so hard- in a good way).

Our next highlighted character is Rayla, from The Dragon Prince. It takes place on the magical continent of Xadia, complete with humans, elves, dragons, and more! Rayla is a Moonshadow elf (one of six types), part of a team of assassins sent to kill the king and crown prince of the human kingdom of Katolis (though at times it seems like her primary mission is to put the “sass” in assassin).

You know what they say about first impressions being wrong? Well, those people definitely need to watch Rayla’s first scene. As she jumps from tree to tree, chasing down a guard who spotted her group, it’s obvious that she is super fast, athletic, and a total badass. What’s more important is how when she catches the guard (super cool butterfly blades crossed at his neck), she lets him go after seeing how scared he is.

Let us explain. Dragons and elves have viewed humans as the enemy (and vice versa) for centuries. It’s a messy conflict. Moonshadow assassins are supposed to be deadly, unbeatable, hypercompetent. But Rayla shows mercy. And not just to the guard. (**When she realizes that their mission is unjust (based on a misunderstanding), Rayla stands up to her foster-father Runaan, the leader of the assassins. She tries to stop the mission, and when he says no, she defends the crown prince and his brother and sets out on a quest to end the fighting.**) 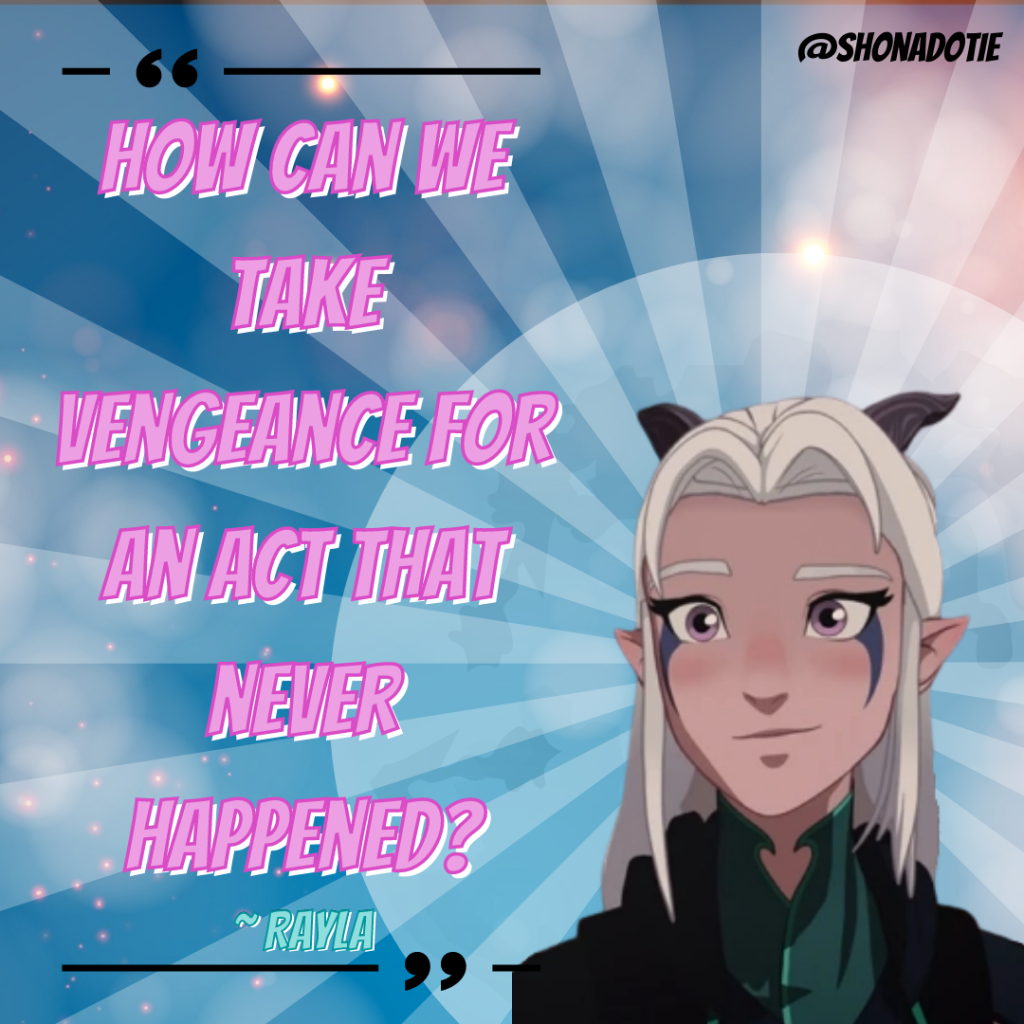 Let that sink in for a moment. Rayla pushed back on beliefs she’d held since she was a kid, even fighting the elf who raised her, and voluntarily decided to travel with two strangers to stop a centuries-old conflict. That takes nerves of steel.

It also takes trust, which is something Rayla works on throughout the show. It’s totally worth it, though, and Rayla is starting to figure that out as she gets closer to the two humans she is travelling with (talk about found family!).

The show isn’t over yet, and neither is Rayla’s emotional journey. We are on the edge of our seats to see what happens next for Rayla (and the show in general).

Lastly, we wanted to highlight Avatar Korra from The Legend of Korra. The sequel to the massively popular show Avatar: The Last Airbender, Korra’s story was controversial for a lot of reasons, one of which, let’s be honest, was Korra herself.

**(As a quick recap, in the world of Avatar, we learn that there are four elements and that communities have been built around them: the Water Tribes, the Earth Kingdom, the Fire Nation, and the Air Nomads. Some people can bend these elements, and others can’t, but only the Avatar can bend all four, and it is their job to maintain balance and peace in the world. Korra is born the new avatar when Aang, the previous avatar and main character of the original show, dies.)**

Brash, bold, with biceps for days, Korra is ready to kick ass as the new Avatar. She quickly masters three of the elements (with the fourth, air, eventually clicking by the end of the first season), and never passes up the chance to show the world what she’s made of.

Too bad that’s not what the world needs. In her avatar training, Korra struggles with her spiritual side throughout the whole show, and her diplomacy isn’t great either. Korra faces unique challenges every season, and while she comes out on top for all of them, it takes a toll. 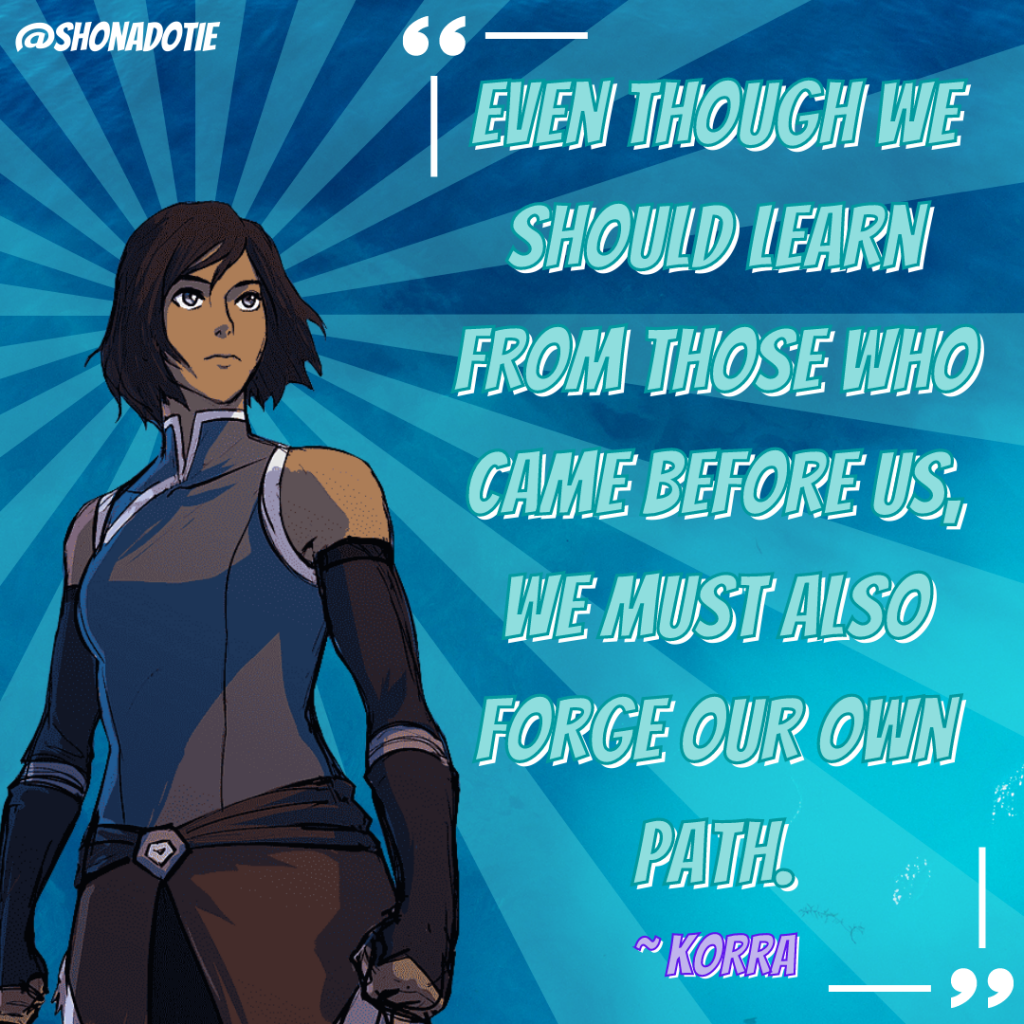 That’s what we’d really like to talk about here: how the show deals with Korra’s mental health (this all happens in the fourth season, so spoiler warning!). **After nearly being killed and left extremely weakened in the process, Korra is in a bad place. Even when she regains her physical strength, she deals with traumatizing flashbacks and visions that block her avatar abilities, as well as depression. She tries to heal on her own and cuts herself off from friends and family, but it isn’t until she reconnects with them and works through her feelings that she starts to heal.**

We admire Korra for her strength, both physical and mental. She goes through a lot in the four seasons of the show, and she is constantly learning to make difficult decisions and become a better leader and advocate for peace and balance.

So, that’s it from us this week! Who would you like to see mentioned as a Shona Hero?

It won't happen overnight. But with small changes