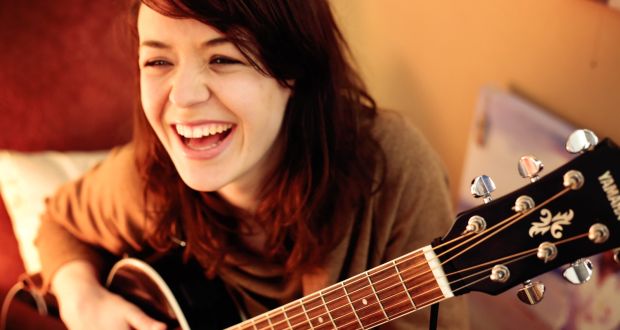 We have such a massive girl crush on Emma Langford. Not just because she is a talented musician, which she is, but also because she has a heart as big as your house. This Limerick lovely lady released her EP in June, and decided to donate all the proceeds to homeless services in Ireland. Emma was inspired to do this having heard of the death of a young homeless woman, Louise ‘Bubu’ Casey, alone in the basement of a derelict building.

Emma also runs a project called the Limerick Lady – hosting gigs and events that give precedence to female performing artists, it’s on facebook at facebook.com/thelimericklady and on twitter at @LKLadyFest .

We managed to get 10 minutes with Emma, but before you meet her, have a listen to her song “Tug of War” which she wrote about dealing with anxiety.

Awkward, uncomfortable and… oily. My skin and hair were a pain. Still are tbh!

As a kid, what were your dreams? How have they worked out for you?

I always wanted to illustrate children’s books! I loved drawing, because it was what my parents did… I still do, but music is my big passion now.

Vocal nodules! I sang every minute of every day in my early teens and wound up with nodes due to poor technique. I had to quit singing and go through vocal therapy and learn proper technique before I could even sing in the shower again. That was a real knock to my self-esteem.

The same thing my mom’s told me ever since childhood, “To thine own self be true”. I’ve always tried to stay grounded and true to myself.

The lines on my face from laughing a lot.

If you could invite 5 women, living or dead to dinner, who would it be?

Who is your go to female when you need a shoulder to cry on and why?

I have a few, which is amazing really! My best friend, my mom, and my two sisters. They’re the best.

I love my resilience, my passion, my determination, and that by virtue of being a woman I have a network of passionate and supportive women around me.

Be patient, you’re not in a rush to find out who you are, and that person is going to change constantly for the rest of your life. Don’t dress or act certain ways to impress anyone – especially boys – because they really don’t care. To thine own self be true.