I don’t know about you guys but I’ve recently gotten hooked on the show Big Little Lies, which follows the lives of seemingly perfect mothers and their families.

I really wanted to write about this show for The Shona Project because I think there’s so many messages that we, as girls, can take from it. And maybe you’re steeling yourself for a righteous and over-analysed review of what’s literally just a good TV show and nothing more. But I’d have to disagree with you there.

This isn’t English class in school where the type of wood that the kitchen counter was made from needs a four page essay. Whilst Big Little Lies is undoubtedly very entertaining, it’s also a statement. As most things are, it was started with a book. Written by Liane Moriarty, on the outside it looks like a trashy crime or romance novel but once you get past the first fifty or so pages you understand that it’s much more.

Reese Wetherspoon and Nicole Kidman both read and thoroughly enjoyed the book so they decided to buy the rights to it and make a TV show out of it. Even that itself just represents everything right with the world. It’s so fabulous that two strong, beautiful women realised that there was a subject not being talked about enough and decided to make the world talk about it! And that subject is of course, domestic abuse. 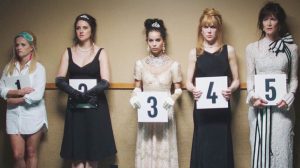 At some assembly or other in school once, a woman stood at the top of the room and said something shocking. She said; 1 in 5 women in Ireland have been or will be abused by their partner. 1 in 5. I looked around the room at the other girls, at my friends. 30 girls in my class, 6 of us will get or have been abused. Jesus.

As I was watching Big Little Lies I had a bit of an epiphany. Though this show has domestic violence in it and certainly highlights the issue, the show isn’t necessarily about domestic violence. I thinks it’s about the relationships that women have with each other and about this toxic strive for perfection. I think it’s brilliant that we’re FINALLY seeing women over 35 on the big screen playing actual lead roles. And not only that but they play mothers who have lives outside of caring for their children, who haves wants, needs, sex appeal, the whole lot.

The show captures the gossipy, catty, jealous and passive-aggressive ways in which some women treat each other. The ways they try to be perfect and will protect their pride with the same intensity that they protect their stilettos and acrylic nails. But it also shows that mothers or even women in general, are not bullet-proof. They cry, bleed, make mistakes and feel hurt and pain. It shows the loyalty and friendship that women share that I have seen so often with my own mother. I love watching the characters support each other, piss each other off, get jealous of one another, risk their lives for each other and love each other.

It’s not about the actual domestic abuse, I think its about how Celeste frees herself from her husband and the support she gets from her fiends to do that. I don’t think it was about Jane getting raped, it was about Madeline taking Jane in under her wing and looking after and fighting tooth and nail until Jane felt safe enough to open up. Even Renata, who comes across as such an annoying tiger parent, reveals what an incredibly strong and kind person she is. As for Madeline, well, I think we can all agree that the woman can do no wrong.

Well done Liane, Reese and Nicole for blowing not only mind but the whole world’s apparently.