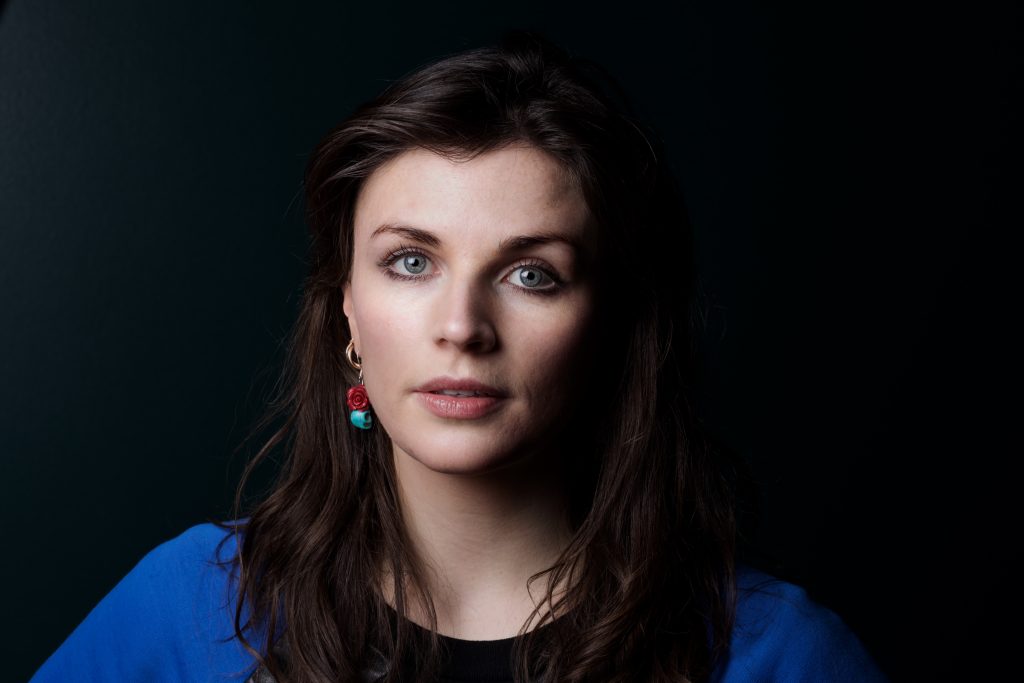 A while back, we had the chance to meet the absolute legend that is Aisling Bea. Our chats were too good not to share again with you! So sit back, kick up your feet, and have a read because this is a good one.

Aisling Bea is one of Ireland’s most successful exports. An award-winning actress, writer, and comedian, she has appeared in Hard Sun, The Fall, Trollied, Live at the Apollo, The Great British Comedy Bake Off, Eight out of Ten Cats, QI, and A League of Their Own. Yeah, she’s a badass.

Originally from Kildare, Aisling moved to the UK to escape a broken heart and said that it was the best decision she ever made. Since then her career has gone from strength to strength and Aisling has secured her place as a righteous member of the Funny Fecker Society.

Like so many others, we fell head over heels in love with Aisling when she shared a heartfelt essay about her father’s death from suicide when she was 3. Honestly, if you haven’t read it already, click here…

If you have, like so many of us, dealing with the loss of a really important loved one, you will understand the profound effect it has on us as people. Aisling’s refreshing honesty can only help anyone who has in the past or is currently going through the myriad of emotions and feelings that are all rolled up in the experience of grief.

We chatted to her about how she became her current awesome self, and what she has learned through her journey into legit success.

Aisling, comedy is a place that sounds so fun and needs more women, how do you think we can get more women involved?

Get your gals together, form a supportive community to ring when you are upset, have a network. This goes for all workplaces, if you don’t have your support tribe to have at work, have it on your phone and be it for someone else too.

What are the main experiences or influences in your life that you believe led you into comedy?

Ooh, I have always loved making people laugh, it is honestly the best feeling to know you have made people happier than they were a second beforehand or woken them up or surprised them. I have been doing it in my family my whole life, I think it sprang from wanting to let my Mam know that I was okay and no one needed to worry about me.

Do you think that it’s important to see the funny side of heartache or challenges to survive? Can that mindset be learned?

Yes absolutely as I pointed out above, so much of our language and the way we speak about ourselves out loud has a massive effect on us, more than what other people say to us. Going around going “This is too hard. I’m not good enough, I could never…” It is supposed to be a sign of ladylike humility, but it is probably the thing holding most of us back – ourselves, not others. Comedy is such a wonderful tool to get things across. No one wants to listen to two hours on recycling, but stick in a spoon full of sugar and make listening to your point an event and the world is your oyster.

Learning the most fun way to sell what you are passionate about is key, it is not enough to just know your stuff or be passionate, people have to want to listen or be entertained in some way.

You talk a lot in your comedy about the challenges of being a woman in general, and we especially loved this clip where you talk about how many ways our bodies can be perfectly imperfect. What do you think is the biggest challenge young women face now?

I think, if you will excuse my French and if French people will excuse me calling this French – shit talk. We shit talk ourselves all the time, afraid of owning our power, afraid of looking stupid for trying. If you give up the fear of looking stupid, everything will follow.  It is how you learn and definitely how you succeed in comedy. Being afraid of “what will people think” has definitely held me back in so many areas of my life over the years.

What advice would you give a young girl who feels that stand-up comedy might be for her? Where does she even start?

Start with a pen and notebook, for a year, jot down every idea soon as you have it, stories after you make your friends laugh, test out different ways of telling them. Then go watch stuff, big people at gigs and smaller open mic nights, then try to get booked,  email, say hello, record yourself, don’t give yourself a hard time, don’t apologise on stage if something goes wrong, own it. Then I will see you at The Apollo.

What is the one piece of life advice that you wish someone had told you when you were 14? Would you have listened?

I definitely would not have listened. I was a very angry, bolshy teenager who spoke more than I listened. But I guess I wish I would have opened up more about my feelings. Secrets breed sadness and I kept a lot of what I was struggling with a secret so as not to worry or upset anyone, but that festered and followed me into my twenties like a ragged old dog. Also 14-year-old Aisling – stop wearing blue mascara, you look unwell.

Who should we meet next? Let us know at info@shona.ie