History was made yesterday, when the aaaahm-az-ing Jodie Whittaker was unveiled as the 13th Dr. Who. We knew the 54 year old show was planning to shake things up a bit, but we never would have guessed that Jodie would have made it. Needless to say though, we’re totally into it.

Knowing that some die hard fans would struggle with the new female lead, Jodie told the BBC “I want to tell the fans not to be scared by my gender. Because this is a really exciting time, and Doctor Who represents everything that’s exciting about change. The fans have lived through so many changes, and this is only a new, different one, not a fearful one.”

“It feels completely overwhelming, as a feminist, as a woman, as an actor, as a human, as someone who wants to continually push themselves and challenge themselves, and not be boxed in by what you’re told you can and can’t be. It feels incredible.”

Needless to say, some die hard fans are having conniptions, as many do when faced with any sort of change. We have so much respect for Jodie, as being the first woman to do anything is always tough, but once the path is paved, everyone just gets over themselves and moves on. We can’t wait to see Jodie kick ass next year. 👏👏👏👏👏👏👏👏👏👏👏👏 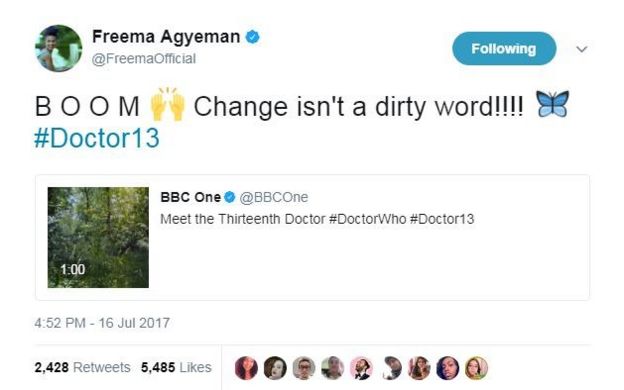