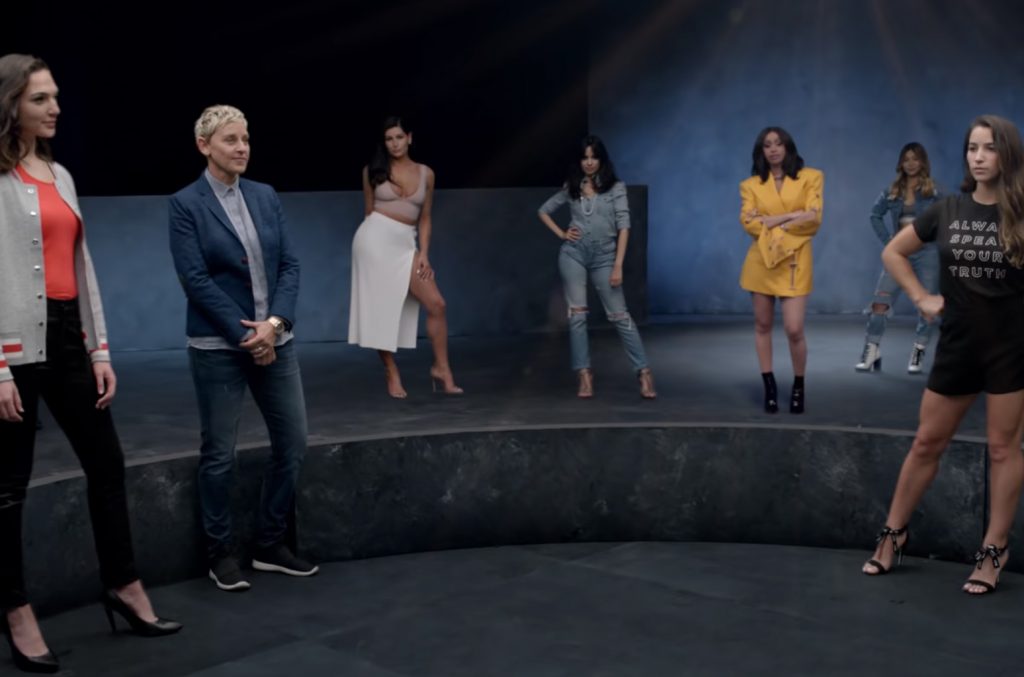 Ok, so this video came out a month ago, and we missed it, but one of our darling readers sent it to us and thought we should share it, so here we are.

Maroon 5 released the video for their latest single “Girls like you” at the beginning of June, which features some of The US’s most respected females. The song features Cardi-B on guest vocals, and Gal Gadot, Jennifer Lopez, Camila Cabello and others made cameo’s in the video. Most of the women are recognised for standing up for equality, or for fighting against injustice. Special Woop Woop to Gymnast, Ali Raisman, who wears a t-shirt that says “Always speak your truth.” Ali is one of the gymnasts who testified against the US Gymnast Doctor Larry Nassar, who was found guilty of sexual misconduct earlier this year.

Here is a breakdown of all the lovely ladies featured…..

Camila Cabello: Ex Fifth Harmony singer, you may have sung along to “Havana” once or twice, or seen her support Taylor Swift in Dublin last week?

Phoebe Robinson: Not so well known on Irish shores, Phoebe is a comedian, writer and actress, often seen on late night talk shows.
Behati Prinsloo and Dusty Rose: Behati has walked in 9 Victoria Secrets Fashion Shows (Leave the rest of us have a chance eh?). Originally from Namibia, she also happens to be married to Adam Levine. Dusty Rose is the oldest of their two daughters.
Sarah Silverman: Gas women altogether, Sarah is a massive comedy star, who isn’t afraid to talk about sexual abuse, inequality, racism and vaginas.
Gal Gadot: Literal Wonder Woman. Born in Israel, Gal shot the Wonder Woman movie whilst pregnant and inspired a generation of future badasses.
Aly Raisman: Gymnast and two time Olympian. Spoke out against team doctor Larry Nassar, who was subsequently convicted of sexual misconduct.
Amani Al-Khatahtbeh: Author, Editor, Tech Entrepreneur and founder of MuslimGirl, on line magazine for Muslim women. Smart as a whip.

Trace Lysette: Star of “Transparent”, and one of the first openly transgender performers to play a non-trans credited role.

Tiffany Haddish: Comedian and actress, super funny and one of TIME’s 100 most influential people in the world.

Millie Bobby Brown: Millie was the breakout star of Stranger Things, inspiring a slew of  Hallowe’en costumes last year. Millie is the youngest ever person to feature on TIME’s 100 list, and recently spoke out against online trolls on twitter.

Cardi B: Currently pursuing world domination and winning at life. Cardi provided vocals for the track.

Jennifer Lopez: The most famous Latina in the world, Jennifer has had more number one’s than we’ve had hot dinners. Or cold dinners for that matter.
Chloe Kim: Chloe was the youngest woman to win an Olympic snowboarding medal at age 17, and went on to be a four-time X Games gold medalist.
Alex Morgan: Ranked by TIME as the world’s top-earning soccer player, she’s also an Olympic gold medalist and FIFA World Cup Champion.
Mary J. Blige: The original queen of R&B with nine Grammy’s and 3 Golden Globe nominations.
Beanie Feldstein: You might recognise Beanie from “Lady Bird” with our Saoirse, Beanie is also a huge Broadway Star.

Danica Patrick: The most successful female race car driver of all time.
Ilhan Omar: The first Somali-American Muslim politician to be elected to office in the US.
Elizabeth Banks: Whilst you might recognise Elizabeth from the Pitch Perfect movies, you may not know that she wrote produced and directed them too. That’s pitching! (sorry).
Rita Ora: One of the UK’s most successful artists, Rita had the most number ones in 2012.
Lilly Singh: Better known as IISuperwomanII to her legions of online fans, she’s a YouTube personality, vlogger, author and actress originally from Canada.
Ashley Graham: Ashley has appeared on the cover of Vogue, Glamour, Elle and Harpers Bazaar and is an advocate for body positivity and self love.
Jackie Fielder: An activist and writer, she’s an enrolled member of the Three Affiliated Tribes and an organizer with Mazaska Talks in the fight for Standing Rock.

We would love to see an Irish band do their own version of this, and highlight the many amazing females we have here at home. Any takers?