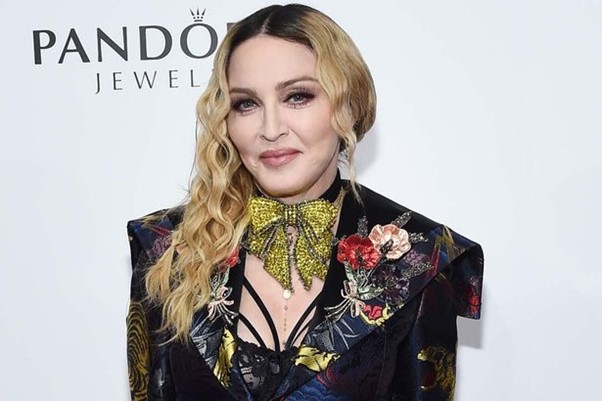 For this Friday’s instalment of Shona Heroes, we have the one and only, Madonna.

Madonna, the name that has an impact without needing a second name. A talented singer, icon and did you know she is an enthusiastic feminist?

Madonna Ciccone, also known as the ‘Queen of Pop’ was born in Bay City, Michigan in the US. She was born to Madonna Louise Fortin and Silvio Anthony Ciccone, giving her both French Canadian and Italian heritage.

Madonna originally moved to New Your City in the late 70’s to pursue a career in modern dance, and then went on to perform as a drummer, guitarist, and vocalist in bands such as ‘Breakfast Club’ and ‘Emmy.’ Her talents were later showcased to their full ability through the release of her self-titled album ‘Madonna’ in 1983. While Madonna may be known for her singing talents, the ‘Vogue’ singer was not shy on camera either as she went on to star in films such as ‘Desperately Seeking Susan, ‘A league of their own’ and ‘Evita’ -which won her a Golden Globe for ‘Best Actress.’ 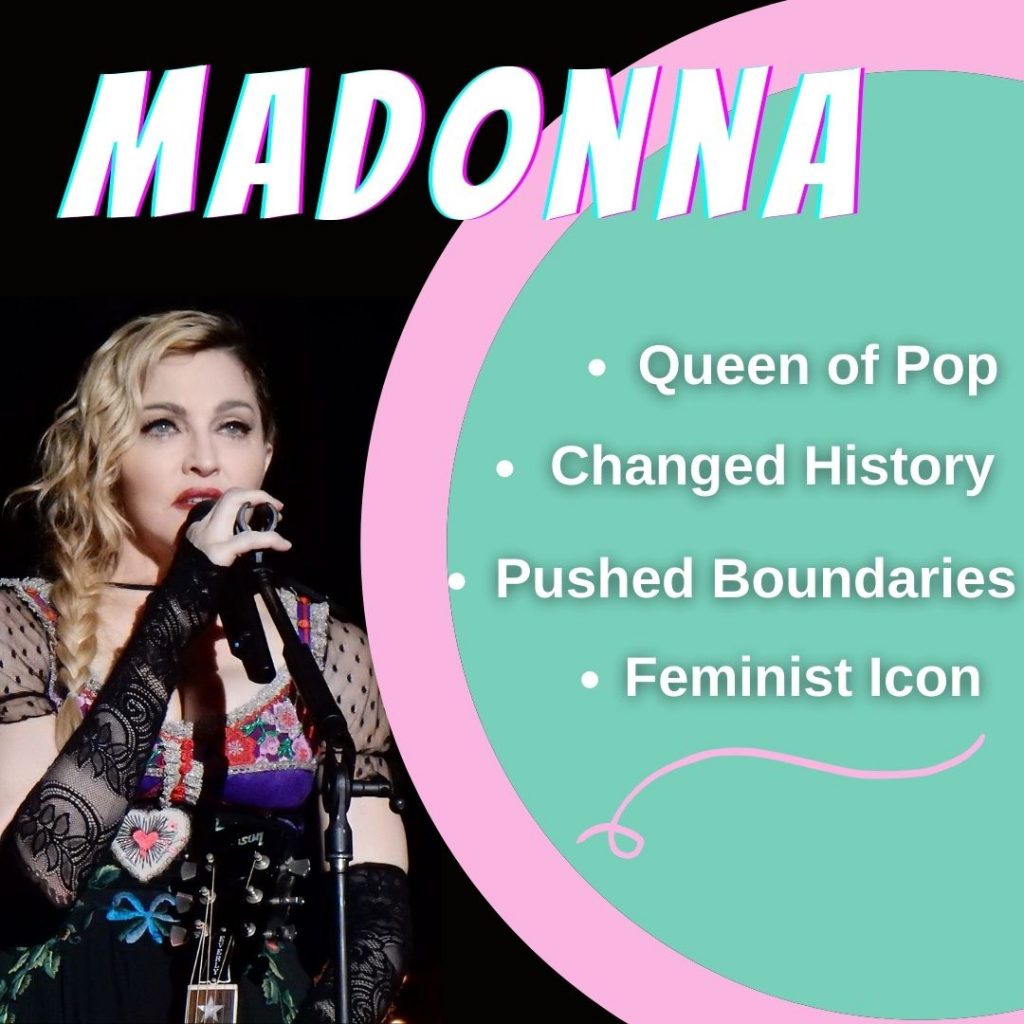 Why do we love Madonna?

Despite selling over 300 million records worldwide and being certified as the best-selling Female Artist of all time, Madonna has still found time for other pursuits. This female icon also has a charitable streak which has led to adoration from us and her fans! Madonna established both the Ray of Light Foundation and Raising Malawi to name but a few of her charitable pursuits.

The Ray of Light Foundation works to promote peace, equal rights, and education for all. Madonna ‘does not accept injustice’ and works hard to make a change within the world. When Madonna isn’t working on tackling injustice, she works with the ‘Raising Malawi’ organisation to help over one million orphans by providing health and education programmes!

Something that you may not know about Madonna is that she is an author! Does this woman have no limit to her talents? She has produced eleven coffee table books, multiple articles and has even made her way onto The New York Times Best Seller list three times! She has also written children’s books including twelve chapter-books and multiple picture books! Inspired by her Kabbalah teacher, she wrote multiple books sharing the lessons she herself had learned through Kabbalah. She promoted the teaching of strong morality and resisting the temptations of greed and envy!

I just want them to be good human beings that treat other human beings with dignity and respect, regardless of skin colour, religion, gender.

While it may be difficult to relate to an icon such as Madonna, she is more like us than we can imagine. Madonna refers to herself as a ‘soccer mom’ and says that being a soccer mom requires you to have ‘no life’ as you are constantly trailing after your kids and bringing them to matches. She says that she doesn’t care what her children grow up to be once they treat others with kindness and respect. Madonna loves spending time at home, make-up free, and cooking. She even manages to spend time on Twitter arguing with Fed Ex for refusing to deliver her parcels. It’s hard to imagine Madonna waiting around for packages while chilling in the kitchen baking cakes! 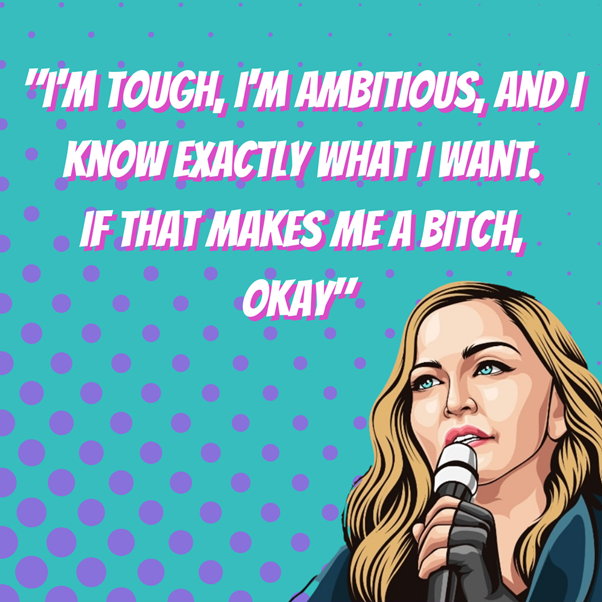 As a female icon, Madonna believes in using her voice and fame to create change and promote equality. Right from the beginning of her career Madonna has used her talent to challenge social norms. The song ‘Like a Prayer’ uses Madonna’s religious education to create lyrics that caused it to be one of the most controversial hits in history! Her music video for  ‘Like a Prayer’ included Madonna making sexual gestures while being in a state of religious ecstasy.  The song even caught the attention of the Pope who called for all TV stations and radio stations to ban the song in Italy. Madonna even managed to call out centuries of racial discrimination within the song by embracing a statue of a black saint.

Madonna has become a known activist in both the ‘Me Too’ movement and the ‘Times Up’ movement. She has spoken out about the industry in which she works and refuses to be pliant or insecure. She had challenged the entertainment industry for ageism. Madonna admits to facing multiple challenges from her appearance to her talents and has even faced criticism for being a single mother of her two birth children and four adopted children. She has admitted that since she has turned 60, she has now faced criticism for her age.

Madonna has also been an activist for the LGBTQ community from the time of the HIV crisis to the anti-gay agenda of politics seen in more recent times. She believes that fighting for people who have been marginalised is both an honour and a duty. 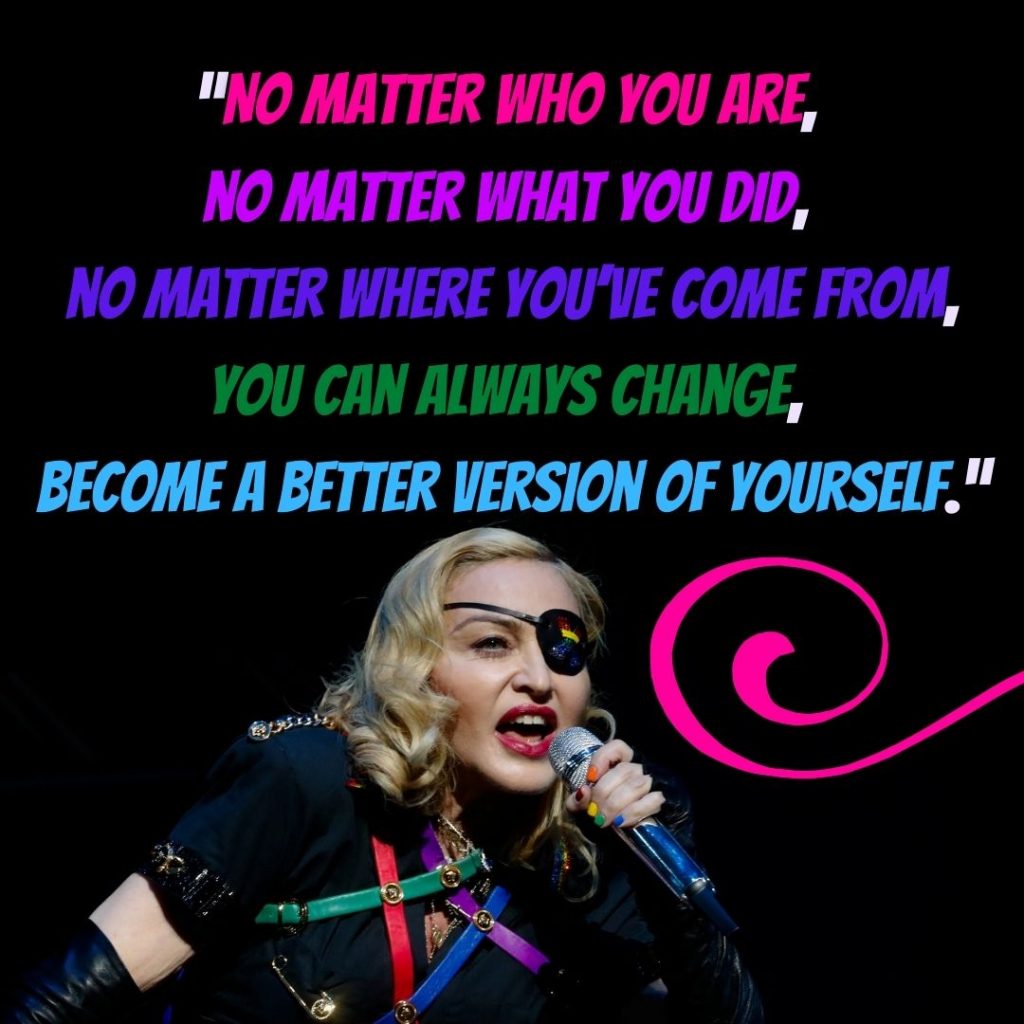 Madonna has achieved many things throughout her life, including selling over 300 million records worldwide. According to both The Guinness World Book of Records and the Recording Industry Association of America, she is the best-selling female music artist of all time! She is also the highest-grossing solo artist of all time and the third-highest touring act of all time. She holds 28 nominations for Grammy Awards and 7 wins! She also has 16 Guinness World Records including ‘Highest-Grossing Music Tour,’ ‘Largest internet pop concert,’ ‘Largest environmental fundraising event,’ and ‘Most Costume Changes in a film for a character,’ although we are certainly not surprised by the last record as Madonna is known for her fashion! She has also been recognised for both her work with charities and activism in different communities. In 2019 she received the Advocate for Change award for her work in the LGBTQ community.

She is also a successful businesswoman owning her own skincare company MDNA skin, the film company ‘X,’ and her Truth or Dare Lifestyle brand, to mention but a few. Madonna has also dipped her toes into the fashion industry through collaborations with brands such as Macy’s, H&M, and Dolce & Gabbana. Is there no end to this woman’s talents!

If you thought you couldn’t love Madonna more, then you are wrong! This absolute Queen has shown us that perseverance can achieve many things and to never give up on your dream!

P.S. We know you’ll be singing ‘Like A Prayer’ for the rest of the day, you’re welcome x