Two of our Ambassadors Honoured this Week.

In May of 2017, I met Alana Daly Mulligan for a hot chocolate in Waterford to ask her all about the amazing short film she had just released called “My Great Aunt Chrissie”. I sat open mouthed as she told me about the amazing work she was doing, the part she was playing in creating change in Ireland, her love of writing and her dream to combine the two to support others in ensuring their voices were heard.

Some months later I had another hot chocolate in Cork with another young lady called Emily Duffy, who had been recognized nationally for inventing the Duffily bag, a specially designed sleeping bag for the homeless. Not only that, but she was working with the Medicity Institute in Dublin to employ homeless people to produce the bags, giving them a way to earn money. 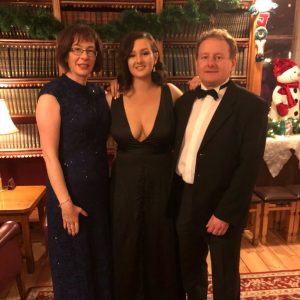 Little did anyone know that come September, these two amazing young ladies would be roommates, and become the best of friends.

Earlier this week, both of our girls were treated like the queens that they are at the Quercus Awards, where they were honoured for their accomplishments, and rightly so.

Alana told us “It is an absolute honour and privilege to be acknowledged by UCC for the work I love to do for others. Thursday evening was spectacular. The Aula Maxima was nothing less than Potter-esque, it was really magical to be in such a historic setting with so many people that are passionate about what they do. That’s my biggest take away from Quercus so far; the drive and utter dedication the scholars have to their fields is phenomenal. It really gives me hope for our generation going forward seeing so many who could lead us into the future…..

….I think it is safe to say that UCC is at the helm for innovation and really recognising the good work that young people do. Cork feels like home now and much of that is thanks to the tight-knit community that not only Quercus has given me, but the campus at large. Everyone is so friendly and willing to help. Coming to UCC has been one of the greatest decisions I’ve ever made. It’s so nice to be in a place where individuality is embraced by all levels of the community.”

Alana and Emily, we are so proud of you both, and honoured to have you as part of our team. You are both hugely special ladies whose level of intelligence and drive are surpassed only by the compassion and love in your hearts for your fellow humans.

Keep it up, the world needs you,