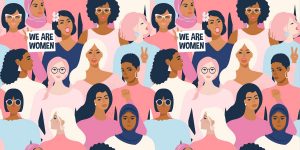 the advocacy of women’s rights on the ground of the equality of the sexes.

Feminism is the theory of political, social & economic equality between the sexes. At its root, feminism is about achieving equality among the sexes, it is campaigning for women to be given the same opportunities as men, be it professionally or personally.

It is not, however, about bashing men. There are so many misconceptions associated with feminism and I think it’s about time we debunk them:

Debunk One: Feminism Is The Fight For Matriarchy

It is a common thought that feminists want a society where women are in charge and men would be oppressed. It is completely untrue, all feminists seek is equal rights and opportunities, and if some political power was to come of equal opportunities, like for example if a woman was to become president of a country, that it would be accepted the same way as a man taking office.

Debunk Two: All Feminists Are Women

Yes, shock horror there are male feminists. And no, they are not conspiring against their own gender! They want fundamental rights for their mothers, sisters, wives and daughters. It is that simple.

One thing I’d like to point out is that tradition is something that is constantly changing, so let’s begin; there’s this delusion that feminists have a problem with women that choose to stay home and raise a family for example. That is just crazy, feminism is about fighting for women to choose their own career path and destiny, be it staying at home to rear a family or becoming a CEO of a company. Both are as relevant and important as each other.

Debunk Four: Feminism Has Something To Do With Sexual Preference

This is an annoying one. Without naming names, while discussing feminism with a distant relative of mine, she said ‘Oh well, they’re all a load of lesbians anyway’. I have never been more shocked in my life, it gives ammunition to that stereotype. But newsflash, all feminists are not lesbians and all lesbians are not feminists. I don’t know how this stereotype came about but it’s severely incorrect.

As a society, we have made great strides with regard to women’s rights. In the US, on average women still, only make .79c to every dollar a man makes. There is a long way to go and by no means is the fight for equality over. We made great strides because of all the feminists that have come before us like Emmeline Pankhurst, Gloria Steinem & Dorothy Pitman Hughes to name but a few, we have to keep striving to make a difference for people that come after us.